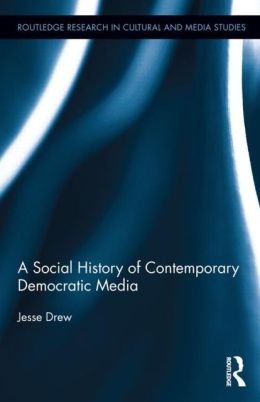 Jesse Drew’s new book, A Social History of Contemporary Democratic Media is a swift tour of alternative-communications technoculture in Northern California and its connectedness to local, national, and global media activism. He broadly covers cable TV, community radio, Internet, and such alternative media practices as “social networking,” then touches upon hacker spaces, hacker culture, old media/new media DIY, while finishing with brief, insightful accounts of “social media”—for instance, Facebook and Twitter—in Egypt and the Occupy movement. One preoccupation for Drew is how local media activism differs from other kinds of social networking and media arenas. He is also focused largely on alternative broadcast media and models for activism and media production.

The first chapters lay groundwork for how language and sensibilities have been transformed through various technological innovations and then, later, how public-access thoughts are at still at work in the Internet Age. Drew’s own writing is self-consciously, wisely devoid of hype or jargon terms, portraying democratic media instead as a social and political philosophy inside of which, we, as agents, act. It is not to be confused with virtual versions of the same; the “Facebook or Twitter revolution” described in Silicon Valley’s advertising myth.

The book emphasizes vital histories of larger-scale national alternative-media projects such as The Gulf Crisis TV Project, which brought together Deep Dish TV, Paper Tiger Television, and many activists and videographers in the early nineties. The origins and workings of Seattle’s Indymedia Center during the uprising against the WTO in 1999 is also discussed. Alternative media is framed as networks of people actively pursuing democratic ideals by making them happen, challenging not only virtual representations in the globalizing mainstream, but the enduring political oppression against free speech, the routine abuse of labor, the murder of African Americans, and other evils. Drawing on the pioneering work of Deep Dish TV (for structuring broadcast and cable) and Paper Tiger Television (for recreating our concepts of “news”), Drew offers formidable knowledge of American alternative broadcasting, both radio and television. It is compelling reading for anyone writing about politicized culture, media history, or anti-corporate activism. His take on the privatization of the Internet is a particularly chilling perspective in these NSA-driven times, on widely popularized and naïve ideas about cyber-utopia.

For Drew, “network” has “nothing to do with electronics” but all to do with people-to-people communication, stating that many utopian communes of the 1960s and ’70s were foundations for the “horizontal” video collectivity behind the media-activist culture to come later. Their operations, how they sprouted out of other media, and how they spread to become the bedrock of American nationalism—if not global alternative media—is useful, original insight from a major player in Paper Tiger TV West, and longtime labor activist and commune dweller. Drew’s deep associations with the labor-union movement occupies one entire chapter. Another major source of his involvement has been as an instructor, activist, and writer in the Mission District experimental scene of San Francisco—where he has had considerable influence—also making numerous award-winning videos and political artworks.

Much of what he says about democratic media, no one would disagree with. What lends particular value to his statements is the emphasis on first-hand accounts of his personal involvement, and depictions of events in which he played a role. Drew also offers particularly fresh insight on recent social-media events: news of whistleblowing, which he deems as nothing new and explains why; Wikileaks’ rarely revived role in The Arab Spring uprising, when they received high praise by none-other than the US government; and a brief, precise account of the American Internet and its deplorable decline into ongoing corporate-backed privatization.

While broadcast television—particularly cable—has been essential to the permanence of public access, political resistance, and the common goal of downing capitalism, one thing postmodernity has taught us about modernity is that master narratives are myths to which other economies of scale must be added. History, like all else, has multiple heads. Each head of history has its own voice and its own useful set of tactics with which to “do media.” Thus it would be interesting to follow Drew on the specifics of video technology as cheaply-reproduced tape, a practice of which local media campaigns frequently took advantage, and from which the CD and DVD have followed. This is an important social history because it comes from the bottom up, and involves significant change in the public sphere. Widespread use of consumer VCRs (attachable to the television or a separate monitor) was critical to political consciousness among the masses. In the early eighties, a VCR could be found fairly ubiquitously in classrooms and people’s homes. Video cassettes presented activists and artists with a cheap and portable alternative to snail mail and object-making; the one-off “original” painting, analogue photograph, emulsion film, pamphlet or book, all comparatively both expensive and limited in “reach.”

Drew’s book is an especially American social history of alternative media. The spectrum of public access television is a cornerstone of democratic communications, coming under frequent, current attack by right-wing policy makers, and offers considerable resistance and power to the palette of activist “tools.”  Drew’s book reminds us of the great era of media activism in the late eighties and nineties and the importance of democratic media as an ongoing idea.