May Attract Other Coyotes or “Putting on Put-Ons”:
The Artist as Trickster

Yes, let us delve into the consciousness and unconsciousness of the artist as trickster, one who probes as “put-on.” The mythical trickster (jokester, mischief-maker, prankster, court jester) has many guises, including the coyote. Peggy Beck writes:

My friends, the Wilsons, had troubles with deer eating their vegetable and flower garden. Their local garden specialist suggested coyote urine to ward off the deer. The bottle’s fine print read: “Caution—may attract other coyotes.” Lettuce ponder the motives of tricksters. Can their acts propagate more actors than action? Why does dust magnetize when I pee?

Comedy writer for the Marx Brothers, Irv Brecher, upon hearing the cost of lion urine, quipped “At those prices, why not just buy the whole lion?!”

“The stripper puts on her audience by taking off her clothes, and the poet puts on his public by stripping or dislocating the familiar rhythms and habits of expression…The poet lets us look at the world through the mask of his poem while wearing us as his mask: ‘hypocrite lecteur, mon semblance, mon frere‘ said Baudelaire to his reader.”—Marshall McLuhan

Usually by this point in my essays, the friends who help me in pre-publication yelp “I’m lost!” Do I unconsciously confuse or am I purposely putting-on the put on? Perhaps I am not out to define, but to suggest…like the Symbolists, who hoicked up: “The poet is thus stating not the thing but the sensation, the effect that the thing produces,” as lit scholar Morris Bishop wrote. McLuhan, advertisers, and rock poets learned a lot from the Symbolists. John Lennon uttered fluently: “You don’t have to hear what Bob Dylan’s saying. You just have to hear the way he says it.”

Why did Luis Buñuel have stones in his pocket at the opening night of Un Chien Andalou? Was he thinking of protecting himself from riots or helping to start them? Might have Bunuel faked the gun blast during the sheep scene in Land Without Bread? If so, it sure did the trick. Anthony Lane called the film: “the tough link between a refined artistic movement and the rawness of political protest.”

As reported on IMDB:

“Bunuel liked to daydream, and his imaginations were frequently used to play tricks on his friends and, in Mexico, one of his favorite ‘victims’ was the Spanish screenwriter Luis Alcoriza. During a hunting party, Alcoriza saw an eaglet on a tree and knocked it down with the first shot, but then he found a price tag on a paw. It was a stuffed bird put there by Buñuel.” “Luis also liked to dress up as a nun and walk around town.”

Why did Stanley Kubrick pull A Clockwork Orange from UK screens for nearly 30 years? Was he strong-armed by UK police to pull it because it allegedly “caused” copy-cat crimes? Or was he subliminally promoting the film? In the ’70s, my wife was nearly raped and killed in Boston by Droog-imitators. Luckily, she escaped by shape-shifting into Bessie Smith, and sang her way out.

“Kubrick knew A Clockwork Orange‘s attempt to ‘rehabilitate’ its audience would back-fire (the whole point of the movie was to destroy social realism). This was for publicity reasons. Once it did more than he expected, especially in Britain, he felt responsible and feared for the safety of his family. Of course, he knew it would raise publicity, but again, that was the plan all along.”

“The trickster breaks the rules, sometimes maliciously, but usually with ultimate positive effects, though the initial intentions may have been either positive or negative. Often, breaking of rules takes the form of tricks or thievery. Tricksters can be cunning or foolish or both. They often are funny when considered sacred or performing important cultural tasks.”

James Joyce called himself a trickster in Finnegans Wake (aka Winnagains Fake):

“Jameymock farceson…the cribibber like an ambitrickster…pseudojocax.” Joyce spawned McLuhan, who called his own percepts “applied Joyce,” and wrote “The artist of the preliterate society is a bridge between the visible and invisible worlds. His art is to create designs, masks, or vortices of power and energy, which ‘put-on’ the public.”

McLuhan put on James Joyce, in more ways than one (or none, or nun).

“His presence demands, cries out for, compassion and generosity toward existence itself. Trickster is a celebrator of life, a celebration of life because by rallying against him a community discovers its own resilience and protective skills.”

That’s fine, but let us consider this genuine fake Buñuel quip: “If I don’t fuck your shit up, I failed.” (“What I want is for you not to like the film, to protest. I would be sorry if it pleased you.”)

No wonder Duchamp freaked when they turned his anti-art into an aesthetic, into “art,” into a commodity. Then again, how much was his “intention” involved? Consciously or subconsciously?

How much is “intention” involved with mischief-makers? Jean-Luc Godard told Michael Moore that Fahrenheit 9/11 would help Bush get elected. It did not necessarily help, but it did galvanize some pro-Bushers. Maybe essay filmmakers (Wikipedia’s entry includes Moore, Melies, and Vertov) are “fake fake” documentarians. Craig Baldwin calls Tribulation 99 “faux faux.” Magician-charlatan Orson Welles challenged the viewers’ complicity with the pleasure of illusions in his fee-fi-faux-faux F is For Fake. 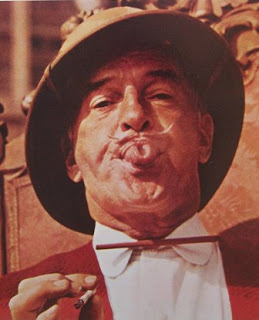 Lord Buckley subverted vaudeville by turning joke-telling into story-telling, thus spawning Lenny Bruce. Gillo Pontecorvo’s fake documentary The Battle of Algiers was used by both the Black Panthers and George Bush as a training film (more specifically as instructional text on insurgencies). Yet, Gillo said “I think that the most The Battle of Algiers can do is teach how to make cinema, not war.” He stressed “The reality of Algeria made the film more than I did.”

What is the role of ambiguity in the process of making films, documentaries, and art? Effectiveness in echoland? Matching or making? Meliesian or Menippean? Tonic or toxic? I am considering being more ambivalent about ambiguity…but I doubt I should decide.

Inventor of the prank phone call, Wyndham Lewis, announced in 1929: “I am part Communist and part Fascist with a healthy dose of Monarchism in my Marxism, but at bottom an Anarchist with a passion for order.” Prince Edward is still running after that gosh darn refrigerator!

Frank Zappa talked about everybody in the audience wearing a mask. Author Jerry Hopkins (who was Steve Allen’s TV-show “kook booker”) writes about Zappa playing a “musical bicycle” on The Steve Allen Show: “I knew it was a put-on, and Steve had always insisted ‘no put-ons,’ but Frank sounded interesting, so he came along. He played the spokes like a harp. He beat on the seat and blew into the handlebars. He would not admit it was a joke.”

Consider my own terribly important aphorism: “There is no such thing as kidding.” Or reconsider Frank’s: “Who are the brain police?”

“The conscious mind cannot create art”—David Mamet, who describes the “confidence game” where the con-artist gives his victim his own confidence, encouraging the sucker to in turn trust him. Yet we’re talking percepts, not concepts.

Actress Quvenzhane “Naysie” Wallis, who played Hushpuppy in the film Beast of the Southern Wild, put on the casting director by saying she was the required six years old when she was actually five. She got the job and in the film summarizes my intentions in writing this essay:

“All the time everywhere, everything hurts, and beating and scrapin’ and talking to each other the way that I can’t understand (holding a bird to her ear). Most of the time, they’re probably be saying ‘I’m hungry, I gotta poop,’ but sometimes they be talking in codes.”

How can we ascend from the rabbit hole through the looking glass and open the doors of perception?

“One of the things I like to animate for all of us is that we all have a magic mirror. The secular critic holds up a mirror to society and goes, ‘Look! It sucks!’ Which is important. The trickster within us all, with a wave of the hand, turns the mirror into a window: ‘But look how beautiful it could be! And then, with another wave of the hand, into a door: ‘Let’s go’ Poof!”

Casey talks about the ability of coyotes to “play.” My friends the Mahlers rescued orphaned coyote pups. They released them in the backwoods on their farm. Being humanized in captivity, the pups wanted to play with us humans instead of running to freedom in the forest. One pup clung to the cage, resisting freedom altogether. Or was he just fooling us?

“I put people on. Putting people on means teasing them, challenging them, upsetting them, befuddling them. Any comic puts on his audience by hurting them … A ‘put on’ is a sort of situation that I study a good deal.”—McLuhan June 27, 1977

Joyce finneganeased the word “manifesto” into “mamafeasta.” Maybe this mamafeasta manque mocks and mirrors Steve Allen’s “Behind every joke, there’s a grievance.” More percept plunder for the recent future? Or quixotic quackery for the snake oil salesman?

Gerry Fialka & Will Erokan put on RIA LIVE at the New Nothing Cinema on Oct 17 (with special guests V. Vale & Rock Ross), and at Oakland’s Krowswork Gallery on Oct 18, 2013.
Interviews with thinkers

5 comments for “May Attract Other Coyotes or “Putting on Put-Ons”:
The Artist as Trickster”