On Collage: Grabbing the Jackalope by the Antl-ears

Jesse Drew has recently explored the life and politics of Pete Seeger through a personal account of his experiences with the songwriter here: http://viewpointmag.com/2014/01/30/real-revolutionaries-carry-a-banjo/

Please also feel free to check out the thematically resonant recapping of the festival of (in)appropriation, screening on February 22nd, 2014 at Other Cinema! 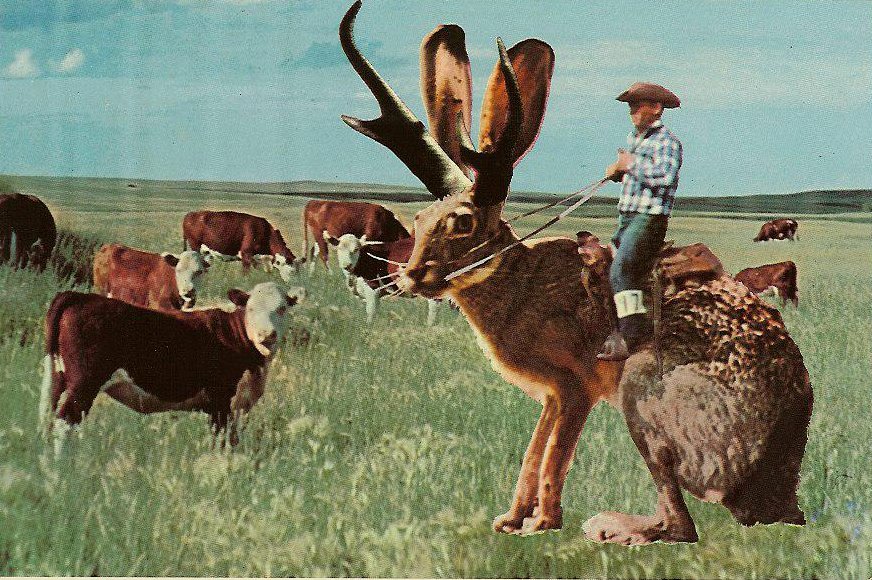 Although Photoshop and other computer-based image tools make photographic collage simple and quick, by no means did this practice emerge from the computer age. There is a long tradition of photographic collage in the cut-and-paste commentary tradition going back to the beginnings of photography, where blade and glue were just as effective tools as Photoshop at turning the meaning of an image back onto itself. Perhaps the most well-known practitioner of this was the artist John Heartfield, whose biting satirical collages attacked the rise of fascism in Germany. For example, in one of Heartfield’s images, the slogan “millions stand behind him” combines with an image of Hitler with his hand in the fascist salute while bankers behind him place millions in his open palm.  In the US, there is a long tradition of using such technique for comic effect. One of the most recognizable is the “jackalope” trope, which at one time could be found in rural gift shops across the nation. The elusive “jackalope” was a doctored image of a giant rabbit pasted in a bucolic meadow scene with a large rack of antlers. The “jackalope” follows in the same vein as “the one that got away” image, depicting a monstrous-sized rainbow trout caught by a victorious fisherman in a tiny rowboat.

These images follow a grand tradition of tall tales and satire, a blend of tongue-in-cheek and cut-and-paste, frequently mixed with a dark sense of humor. Today, doctored images flood the email boxes of millions and represent a large amount of the images popping up on Facebook sites and other image-sharing and social networking platforms.

An early photoshopped file that demonstrated the power of the image-doctoring powered by the internet was a cleverly constructed photo that showed a backpacker on top of the World Trade Center while a jetliner loomed in the background, ostensibly someone’s last photograph found in the rubble of the twin towers. This photo reached such a wide distribution that mainstream press felt the need to step in and point out that it was a fake. While this example demonstrated the ability for an image to deceive, it also demonstrated the speed at which a single person could deliver an image to such an enormous global audience. Another somewhat astonishing example is the case of how Sesame Street’s Bert from Bert and Ernie wound up on posters held up by angry Bangladeshi demonstrators in the pages of Time. After the attack on the World Trade Center and the retaliatory strikes in the Mid-East, demonstrators in Bangladesh wanted to voice their condemnation of the attack on Afghanistan by showing support of Osama Bin Laden, the equivalent, perhaps, of burning the American flag. As Osama Bin Laden was a private person, there are not many pictures of him, so the protestors did what most people would do in the digital age, they conducted a Google search for an image of him. Unfortunately, they found the satirical and humorous web site, Bert is Evil, which depicts the muppet with evil people throughout history, including Osama bin Laden. They downloaded that image, not recognizing that the image of Bert was in the picture. That photo was printed on thousands of posters for demonstrators to carry, and their march was photographed and printed worldwide on the wires of the Associated Press and Reuters, thus sending the image of Bert and Osama full-circle around the globe in a true demonstration of the power of global media.[i] The problem this represents to corporate America is that many of these cut-and-paste images often violate copyright and often depict commercial products and their logos in a negative light. A more contemporary example of the global proliferation of a photoshopped social commentary is the now famous “meme” of a police officer causally pepper-spraying students of the University of California at Davis, who are passively sitting on the ground. An artist photoshopped the cutout of Lieutenant Pike into a famous work of art and began an avalanche of artwork depicting the pepper-spraying officer in historical images, popular films, and historical moments in time, including the Disney film Snow White, the record album of rock band Pink Floyd, Lego constructions, and among many other copyrighted scenes and products. The speed at which these images appeared was shocking, not only to corporate holders of trademarks, but to the University and police officials who desperately wanted the subject to fade into obscurity. Today, when images become “memes,” there are sites such as Tumblir, Pintrest, Reddit and other sites where they can be quickly displayed, shared, and downloaded among global audiences.[ii] 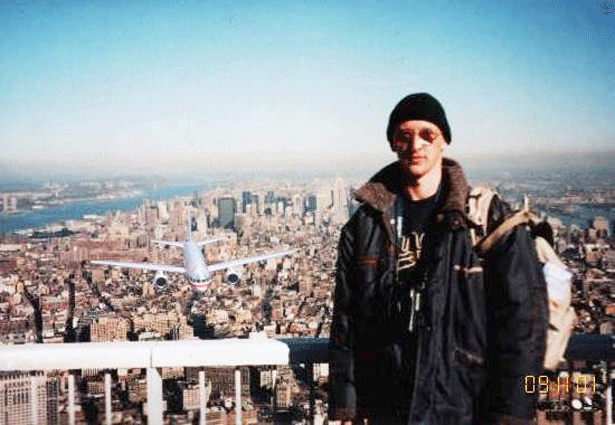 Since these digital works of social critique are often created anonymously or collectively and distributed at the speed of light, there is little a corporation or politician can do to stop them, at least at the source or at the individual receiver. It is for this reason that the importance of the centralized broadcast model becomes critical, as there will then be a central gate where digital media can be stopped, filtered, investigated, or charged. The decentralized peer-to-peer model does not allow this. Thus peer-to-peer networks or sites using bitTorrent have faced the harshest police actions, from lawsuits to brutal invasion of homes and seizures of hard drives and computers, as in the cases of networks like the original Napster, LimeWire, or Pirate Bay.

Of course, the manipulation of images for social commentary is only a small part of the enormous exchange of manipulated media that goes on today. Video and film clip manipulation and commentary, music mash-ups, voice-over replacement, phony subtitling under television scenes, and much, much more comprise a large part of what is flowing through the internet today. It could be truthfully stated that much of this material is just for entertainment, but it would be hard to sort that part out from the large amount of media manipulation that is commentary, social activism, or critique and criticism of commercialism, political hypocrisy, and our current political and social situation, all of which—unlike entertainment—would be protected by the provisions of fair use, without facing copyright restrictions. New laws pushed by mass media lobbyists aim for a chilling and restrictive media environment, carefully controlled by centralized gatekeepers who will drastically impinge such a free exchange of media exchange regardless of its intent.

[i] Bert Is Evil: The Only Official Evil Portal, http://bertisevil.tv/