The lights of Tokyo are world famous – from the colorful neon of the Ginza district to the Diamond and Flower Ferris Wheel in Tokyo Big Site.  The illuminated phosphorous powers enough eye candy to make Las Vegas jealous.  However, in one dark corner of this 24-hour electric wonderland in the section of Akasaka, Tokyo’s business district, one can find a singular series of gleaming, glowing lights that collect together into a pyramid of the most seductive formation of light-emitting diodes ever constructed.  A precursor to the video mapping revolution and other popular large scale public LED screens are the TBS Media Stairs.

Every day thousands of Japanese business women and men are greeted to work by a ten foot tall video pyramid interwoven into stairs that point out of the underground caverns of the Tokyo Metro into the light of day. Twenty steps in all, each contain a 6-inch-tall LED screen.  The width of each step ranges from 23 feet at the base, all the way to just under 5 feet at the top in a crescendo directing upward to space.  The individual steps recede back 20 inches from each other, shifting the perspective of every screen.  All together the installation creates a fascinating palette of visuals for the morning commute of business professionals.

After visiting the installation and marveling in the endless wonderment of images spilling from the screen, I contemplated on the history, development and implementation of such a complex undertaking.  I pondered what it takes both physically and aesthetically to create such an intense project.

Discerning who was behind this matrix of LED lights took no time at all.  One of the biggest companies in all of Akasaka is Tokyo Broadcasting Systems (TBS), the largest television and media company in Japan.  So, naturally any project of this magnitude containing video content in the area could only be produced by TBS.

Construction took place roughly 8 years ago when TBS was in the middle of a major overhaul of their headquarters and part of the redevelopment included creating a fresh image for the area around the new TBS skyscraper.  This is why the company sought out Naohiko Kishi, the TBS Media Stairs project producer.  He had a vision to create a project “capable of changing people’s faces into smiles” as they make their way to work.

Almost all public art strives to uplift people out of the dredge of their daily existence. The difference with the TBS Media Stairs is that Mr. Kishi decided to elevate the challenge and work with something unconventional.  Engaging public art is becoming a common occurrence in our modern world.  Milan has a piano staircase where all day long people are playing “chopsticks” by hopping up and down each step.  All over Berlin you can find mobile film festivals where people will simply bring their laptop and a video projector and show fresh video artwork to anyone passing by. The art team Urban Screen turned the iconic Sydney Opera House on its head.  By using projection mapping they converted the roof of the Opera House into a living organism showing video and animation that re-contextualized the world famous building.  So, the TBS Media Stairs in Tokyo fits very well into the changing environment of “public art”.

The genesis for this project came from an unlikely place – the Takarazuka stage performance show.  Takarazuka is known throughout Japan for its elaborate Broadway-sized sets, decadent costume design and sophisticated musical performances.  It is also known in Western academia for its gender-bending reputation.  In a complete reversal of traditional Japanese Noh and Kabuki theatre where men play all roles including female characters, Takarazuka is the only major production in the world made up entirely of female performers.  In Japanese modern culture the gender role reversal is accepted without question and is enjoyed by millions of fans like Mr. Kishi.

In his description for the origins of the TBS Media Stairs  Mr. Kishi illustrates how Takarazuka uses stairs as a regular icon for their productions.  It is the elaborate set dressings, costumes and the interaction between the performers and lighting which gave birth to idea of the TBS Media Stairs.  In Takarazuka the actors cast long shadows against the ever-rising staircase and, in that, Mr. Kishi envisioned the glow of a large dynamic video screen.  However, according to Mr. Kishi, it’s not just video but a “one night amusement park” he wanted to create.  Just as the cast of Takarazuka will dance and perform in front of their stairs, Mr. Kishi created stairs for anyone to dance and play on and “become a part of.the stairs.”

Artworks that utilize digital media and interactivity are popping up everywhere.  However, it is a significantly greater accomplishment to construct digital artwork that is permanent in a public space.  Essentially, this is a set of 621 delicate video panels open and vulnerable to the world.  The most convenient aspect about this entire project is that the area is owned and maintained by TBS and therefore, no official city involvement was required.

The media content displayed on the stairs is numerous and comes from varied sources.  Just about all the content displayed on the screens is digital animation, which immediately transports you into a completely different world where butterflies swarm like locusts, a city scape transforms into abstract spirals, candy colored cubes form in the darkness and multiply swimming across the floor.  Each segment lasts for only a moment, but it is easy to become entranced for hours. My favorite segment is a simple scene of showering balls that appear to be bouncing down the stairs toward you. It’s also the favorite of Japanese children who are regularly seen chasing after the phantom balls. 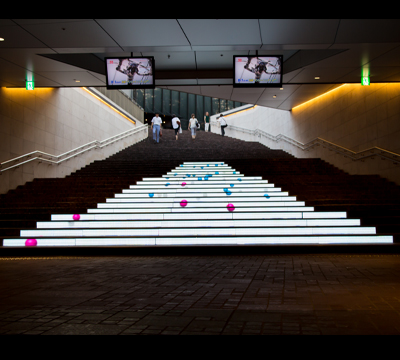 So, the obvious question is where can we go from here?  During the early research stages of the TBS Media Stairs Mr. Kishi came across another unrelated staircase in Shanghai consisting of five steps all implanted with monochromatic LED screens, but it was less provocative and the content was merely scrolling text.  However, it shows that there is a thirst and willingness from a variety of communities to attempt risky and complex public art projects.

In the end, I think what makes this project and many like it so interesting is that we enjoy experiencing fun escapist imagery outside the home.  We get to marvel in complex visuals and stories in the fresh open air.  They can lead to conversations with our friends, colleagues or strangers.  It becomes an exercise in re-contextualizing the world that we take for granted because banal public art just doesn’t cut it anymore.