You may already know the Ann Arbor Film Festival is a personal experience for me so expect my tale of what I saw at this year’s 53rd incarnation, March 24—29, 2015— the memorable screenings, colleagues and friends encountered, and evocations of memories–to be a deeply subjective report as well.

I didn’t make it down to the festival until Friday, but I would have liked to have seen the University of Michigan-sponsored lecture and films by Tacita Dean as well as Curt McDowell’s 1971 Confessions, since I remembered him taking tickets at the Roxie Cinema in the early 1980s in San Francisco prior to his AIDS death. I was most sorry to miss the presentations of films from “the early computer age” 1953-87 also, since I made a short computer graphic animation in 1984 (which took hours) while employed to create instructional graphics.

I always look forward to the fine documentary work shown at the AAFF. This year, works that inspired our homeboy Ken Burns like Port Noir by Laura Kaning observing Los Angeles’ harbor and Echo Chamber by Guillermo Moncayo riding a rural railroad in Colombia, were among them. Iron Ministry was 83 minutes of train travel around mainland China. Director J.P. Sniadecki, who speaks the Chinese language well enough to interview riders, included a group of Muslims from western China who were comfortable enough to speak about their lives. A group of Han Chinese affirmed their goodwill towards all people and the shots were so visceral you could almost smell the cigarette breath, spit, vendors’ foods and railroad odors.The film was evocative of Snowpiercer, with its claustrophobic shots, which I had watched the week before. Scott Cummings’ Buffalo Juggalos was time-spent with Buffalo, NY devotees of the Insane Clown Posse as they grimly stared into the camera, kissed, violently abused each other, or smashed a car window just for a goof.  Shots were as dramatically lit as I remember the freaky Ripley’s Believe It Or Not Museum in Niagara Falls to have been for me on one a childhood visit.

Some personal short nonfiction films I enjoyed included Alexandre LaRose’s Brouillard Island which made a a short stroll by the water into a shimmery LSD experience, Vanessa Renwick’s Layover which focused a single shot upon amazing flocks of birds, Holly Hey‘s recounting of growing up as a barber’s lesbian daughter in Dum Dum Capital of the World, and Time/Change by Owen Goldenberg which featured an expressive urban stroll by the dancer Hallem “Stringz” Rasul.

The AAFF is noted for its art films full of poetic non-sequiturs, non-objective color and light, sturm und drang.  This year’s strong presentation of films by Wojchiech Bakowski from Poland was especially good– short films and videos spanning from Strach (Fear), 2005–hand-drawn upon the film–to complex, loosely impressionistic combinations of video, animation and sotto voce narration in recent works from 2013 and 2014.

I See Faces in All Places by former AAFF Director Donald Harrison made use of footage from the Heidelberg Mobile Movie Project at Tyree Guyton‘s Heidelberg Street project in Detroit.There was computer animation by Simon Alexander in Noises//Void, but I liked the hand-drawn, Heironymus-Boschian Two Ways Down by Laura Heil. Her bountiful imagery had a mix of informality and organization that might be called characteristically “girlish” the way Bakowski’s Strach had a frenetic messiness that might be called “boyish.”

There is a territory between documentary and artifice that many AAFF filmmakers traverse well. A Park For The City by Nicole MacDonald was a fairly objective wander around Detroit’s unused Belle Isle Zoo, noting the occupying fauna and flora, but Gerry Fialka argued that its construction resembled an Adam Curtis film or the cinematic tradition of subversion of any singular truth as celebrated by Amos Vogel. In fact, Gerry had first thought that MacDonald used a clip from him, then learned later that she was using a Chris Marker-like essay-film (fake fake, or genuine fake, Gerry calls it) approach to her subject matter. 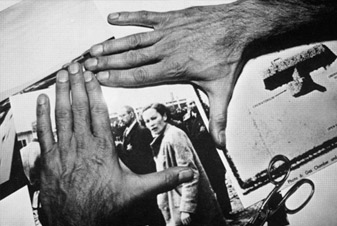 Earlier in the week several works by the late Harun Farocki were screened. On Friday they showed Jill Godmilow‘s What Farocki Taught, 1998, a methodical, shot-by-shot remake (now in color) of Farocki’s 1969 German language movie Inextinguishable Fire about Dow Chemical Corporation’s production of the petrochemical monstrosity ‘napalm’ a chemical weapon used in Vietnam that clings to and burns human flesh. Godmilow, Emeritus Professor at Notre Dame, was present for the screening, and discussed both it and Farocki’s impact with filmmaker Mike Hoolboom. In both films actors portray Dow scientists, executives and staff. Testimony by Vietnamese at the Vietnam War Tribunal held in Stockholm open the film. A man who suffered a US bombing attack employing the weapon followed by an actor playing a scientist reading an encyclopedia definition of ‘napalm’ are heard speaking in a fabricated but believable dialogue possibly assembled from fragments of texts from the company publications. Throughout the chemists and executives question war and their contributions to it, but opt for patriotism.  1960s fashions, hairstyles, and office equipment are punctuated by a burning dead rat and bits of footage of gloved fingers or tweezers probing seared flesh. Here and there, sometimes in ghostly super-impositions, bits of Inextinguishable Fire poke through. Godmillow appears in the last few minutes with a cigarette, talks about the project’s intentionally-old-looking film stock and answers an off-camera interrogator.  A selection of Farocki’s other 90 nonfiction films were shown at this year’s Festival too, while What Farocki Taught can be found on YouTube.(see below)

This evocation of ‘napalm’ resonated with an experience I had at about age 12. My friend Scott (whose mother,in the 1940s, had worked as secretary for right-wing “radio priest” Father Charles Coughlin) and I were experimenting with explosives and, in junior high school, discovered that dissolving Styrofoam in gasoline made ‘napalm’.  We called this substance “Napalm A”.  When I read an article in TIME about molotov cocktails, I learned that Ivory Soap Flakes made the gasoline sticky, and added it to our mixture, calling the outcome, “Napalm B”.  We had five pound coffee cans of A and B each, in our respective basements.  In a bluebook with a University of Michigan logo, I kept careful notes of our experiments, how long they burned when put on a stone wall; if they ignited with a cannon fuse and more.

When I told my science teacher, he traded some potassium nitrate (used for making gunpowder) with me and I gave him a sample of each napalm type.  My mother was terrified when a black class-mate of mine (later the county’s Assistant Public Defender) called asking about it. She was terrified that he was a Black Panther.

The following summer my Dad drove us to upper Michigan through the middle of the state but the ’64 Buick had car trouble in Midland.  Across the street from the garage where we stopped was Dow Chemical headquarters. I walked over and asked the lady at the desk—Mrs. Finch (as in the movie?)—if they had any information on ‘napalm’, thinking I might share my formula secrets. She was a bit puzzled at the polite thirteen-year-old asking this question and quickly said “Dow has many government contracts” and handed me an annual report. Our pre-adolescent moral sense of war’s destructiveness and anguish was undeveloped and Farocki (and Godmilow) shows how the corporation’s moral sense, like so many American citizens’ own moral sense, was underdeveloped with respect to war at the time, too.

Dow is now a major benefactor of my university and buildings are named after members of the founding family who gave generously. Nevertheless, Godmilow’s film should be shown on our campus as a gesture to this past.

The last event I attended was a Sunday afternoon tribute to festival founder George Manupelli (1931-2014), where a supreme court of gray heads (and fluffy once-interim AAFF Director Chrissta Hamilton) recounted memoirs. Most memorable was Emeritus Architecture Professor Joseph Wehrer (his late wife ghosted Iggy Pop‘s 1981 autobiography) and Alan Schreiber, who married one of Manupelli’s ex-wives, acted in some of Manupelli’s films, and was Dean of Students at the San Francisco Art Institute when Manupelli was President. 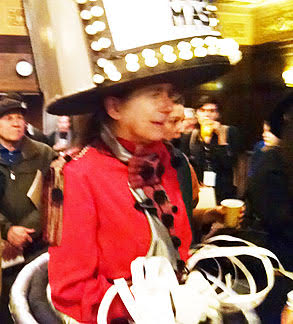 Dancer Pat Oleszko, who regularly appeared in Manupelli’s films, productions, and Festivals, closed the forum with a grand, costumed performance in which she inflated a cinema building façade for which she was both ticket/popcorn vendor and ticket-taker. Oleszko spoke puns of praise for her friend.  Some of Manupelli’s droll, surrealist follies were on view. A call for artists’ proposals to celebrate him has been issued, so I proposed to the Festival an installation next year to honor George by celebrating his most memorable actress, Pat Oleszko, and her influence on the “little sisters”, creative women who grew up in southeastern Michigan with Oleszko as a delightful, highly visible, Dada-feminist role model.

Sadly, Goddess Bless All Great Michigiwomen was not funded and not at a monumental scale in aluminum and styrene signage plastic as intended. I donated a 16″ x 20″ framed presentation sketch of the piece to the Silent Auction and was pleased to find it on the Michigan Theatre’s mezzanine surrounded by Manupelli’s own AAFF posters and graphics.

Director Leslie Raymond, her staff and many volunteers deserve thanks for another excellent annual celebration of surrealism, narrative, humor, sexuality, artifice and cinema.  You can get a fine education in Ann Arbor, and the annual Film Festival remains a greatly provocative and jolly way to do exactly that.