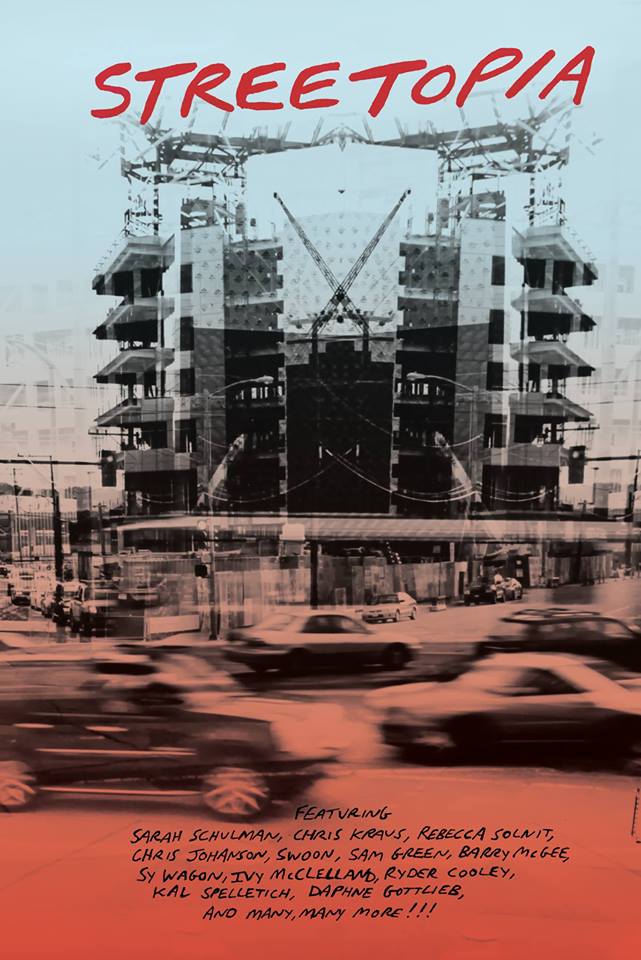 Cover of the new book

OZ: How do you see your exhibition/catalog in regard to changes in mid Market area? Any comments as to visions for the future of that hood, either hellish or heavenish?

“Streetopia” was an intervention into the current transformation of Market Street designed to call attention to the strengths of the community that already exists in the area – a community that is repeatedly rendered invisible by city administrators, dot com execs, and arts organizations (like Burning Man) who again and again describe Mid-Market and The Tenderloin as a desolate and uninhabited wasteland in their comments to media. It was also a rebuke to the forces who continually discuss “cleaning up” Market Street as if its residents were litter or trash. The exhibition proposed nothing short of an entirely different reorganization of society around concepts of mutual aid and non-monetary exchange. While such utopian solutions are often branded as “unrealistic”, “Streetopia” held that there is nothing that could be said to be “realistic” about current plans to transform the area by flooding the area with new rich residents. This will do nothing to address the lack of housing or the enormous disparity between rich and poor that we see on the streets of the city. The forces that are transforming Market Street are very wealthy and powerful and difficult to oppose. We got quite a bit of media attention – including NY Times – with our opposition to the mayor’s plans.  The book is an effort to continue to call bullshit on the new dot com city of the rich while offering strategies, analysis, new theory – and, hopefully, inspiration –for a continued struggle.

The future of Market Street that seems most likely is that plans for the “dot com corridor”, the “Tenderloin Arts District”, and the Better Market Street 2018 redesign of the street will continue the gentrification and economic cleansing of the area.  When the remaining poor and homeless are at last gone, the city will begin to implement the designs for redrawing transportation and street life on Market.  But the city is broke – and as we all know, it is the tech industry’s hope that the government is soon to be “disrupted” out of business anyway. So it’s not difficult to foresee that Twitter and other tech companies will have to step in to help the city fund the redesign of the street. In this new “public/private partnership”, the street will, like the old rail lines of Chelsea, at last be declared a defunct space to be reimagined not as a main street but as a space more like The High Line – a kind of park and outdoor mall for tourists all rolled into one. Burning Man will curate a series of public art sculptures. The street will feature movable seats and benches and bean bags like the famed open floor offices of Silicon Valley. A common site will be impromptu gatherings of yoga enthusiasts right in the center of Market Street – which will by then have become car free as activists have long hoped. The creeks there daylighted. There will be lots of shopping opportunities – food trucks, “locally owned” clothing stores, etc. But private security will carefully restrict the access to the area of the homeless and poor. The street will come to resemble the great and uselessly wide suburban boulevards of Silicon Valley, its former concrete turned into the lawn of an epic corporate campus built for the dot com workers who rule the street. It will be considered the greatest urban redesign story in recent history – even more successful than the redesign of Times Square into a corporate pedestrian mall or the High Line itself. The great erasure of the poor and homeless who once lived there, already well under way, will make it possible for many to forget that their new kicks came at someone’s displacement and that the new space is but a cynical Potemkin facsimile of true urban life.

Another possibility I’d love to see… I was once part of a group of artists and activists who in 2001 took over an abandoned pool hall at 949 Market, where we put on enormous shows with art, bands, readers, feedings and held a Sunday morning Free Café with free food and coffee in the squatted space. The building was torn down recently and is supposed to be the future site of City Place Mall. I’d love to see people simply reoccupy the space in an Occupy Wall Street kind of way. A mass movement against malls, an encampment demanding at the very least that the space become a spacious new park, if not some kind of community center.  I hear the mall is having trouble finding a master tenant and the project is delayed. Now is the time to strike!

In San Francisco, every future is shadowed by its negative double. Also not difficult to imagine the new City Place Mall looted and in flames after, say,  a 2017 incident in which a white cop kills an unarmed black man in the city and is let free by a jury. The Rodney King Riots took out a large swath of Market Street in 1992 and sadly the conditions that made them happen have only become more heightened and entrenched since…

OZ: By what creative and conceptual process did your exhibition turn into a printed publication?

Strangely, it was a book before it was a show. I was working on a book about the conversation between utopian movements in the city and how those utopian art, literary, and social movements had shaped SF. I asked Chris if he wanted to turn it into an art show with me to help launch the book. Chris brought Kal on board. The three of us started to work on it as basically a release party for the book. But then the computer I was writing the book on was stolen and I didn’t have a back up. Deadlines for working on the show loomed. So we just continued with the show and I put all of my effort into the making the show enormous instead. Mayor Lee announced his plans for the relocation of Twitter to the neighborhood of the Luggage Store and I saw an opportunity there. So I redirected the show’s focus, greatly expanding it to become a kind of Tenderloin Art Biennial with over 150 participating artists, writers, activists, etc. So much attention was being focused on Market Street then in the real estate fever of the moment that I knew if we went really big with the show, we could get tons of attention for our oppositional ideas for Market Street.

We all wanted to do a show catalog afterward to document the immense efforts of “Streetopia”. We had five weeks of free daily events, five weeks of a daily Diggers-inspired Free Café, several venues, etc. We wanted to let the greater world know that had happened. The show was actually a little too ambitious for most folks in SF to really grasp the full extant of it, too. Many people came to events several times a week, but there was so much going on that who could really get it all? So it seems good to have all the work in one place in the book. Meanwhile, the book has expanded into a deeper meditation on the state of cities in the neoliberal world today, the ongoing search for ways to make community in the dot com city, the role of urbanization in the world economy today, and the long history of utopian movements in the city. It’s around 300 pages, totally jampacked, and I’m really happy with the range of “high” and “low” culture in it! This book could be taught in a university course on urban theory, could be discussed at the museum, would be at home in the Occupy library, and will sit for years comfortably on the back of the punk house toilet.

OZ: How does this book relate to the nature of contemporary art exhibition and political and subcultural currents? Book fares, zine world, organizing, anti-eviction, etc?

I don’t know… I suppose I wanted the show to resemble an art fair because that is the trend of contemporary art. The art world has consolidated into these mega corporate fairs. City administrations across the globe are still enchanted by the ideas of Richard Florida’s “Creative Class” books, so everyone wants art to come and revitalize their cities now. I thought using the form of the art fair but for the Tenderloin was a nice twist on that – could an art fair help offer support and “improvement” to a community that already exists rather than for an imagined future population of gentrifiers and displacers that the fair might hope to bring to an area? I think “Streetopia” was indeed successful at that, but, again, we are operating on such a limited scale compared to the vast wealth that the developers are using against us.

Also, maybe this is the place to say I’m not so interested in subculture anymore. I mean, I am a punk and always will work in that DIY punk scene in some way. But “Streetopia” was an attempt to take our ideas to the entire city in the largest way possible to make the biggest impact possible. I don’t think subculture is going to cut it anymore. We need to take the whole culture over. Our survival depends on it.

OZ: Speak to the prospects for a living breathing “Streetopia” ethos anywhere?

Roxy Monoxide from Moira Scar wrote a really wonderful piece in the book about their life story and how it intersects with the utopian promise they once found in the Bay Area. Roxy pointed out that “Streetopia” had demonstrated that even though we are always bemoaning all the things we have lost and how bad things are now, there is still quite an enormous community of badass freaks in the Bay Area who are ready to do cool things together anytime. I think it’s important to keep that in mind – that things are still possible, that the future is unwritten (and in the Bay, the future has always come with an unexpected twist). Really, I think we demonstrated how much is possible with almost no money and no institutional support. No corporate funding. No kickstarter. We just did the work. “Streetopia” focused on mutual aid projects that could in fact be happening anywhere at anytime. We don’t need an excuse to run a Free Café in the Tenderloin National Forest – we could still be doing it right now if folks wanted to do it! The point was to make it clear how much could be done right now, like without renting a new space, or without having to invent a new movement. There is always a time and a place for the kind of utopian ideas in the show. “Streetopia” could live and breathe anywhere we will let it.