The first time I heard about the occult San Francisco Bay Area film collective named “silt” was during my research on the films of Stan Brakhage, as a PhD candidate at Université Sorbonne Nouvelle Paris-3 and as a visiting scholar at University of Colorado in Boulder. In an interview with Scott MacDonald, Brakhage describes silt’s films in laudatory terms which attract attention:

“the SILT group from San Francisco–three young men [Keith Evans, Christin Farrell, Jeff Warrin] who go out and bury film in different kinds of ground, like clay, and different kind of earth, and leave it for a while, come back and look at it and don’t like it, and put it back again until finally they get these fantastic patterns. And then they spray them, freeze them, and turn the projector sideways and run them as landscapes. They are absolutely fantastic, beautiful films. Well, Jeff Warrin came to Boulder and got so excited about Commingled Containers that we went to Boulder Creek [where Brakhage made the film Commingled Containers] and upstaged me beautifully. He took just a Kodachrome Super-8mm cartridge, which has a little aperture that he covered with tape and then put a pinhole through it. He picked up a stick, something he could turn the film with, and stuck the whole thing under Boulder Creek and turned the film, exposing frames. Well, of course, with a pinhole camera he is getting infinite focus, so you see all the little bubbles in all directions and whatever little thing that is coming down that stream, every little piece of dirt and whatnot–it’s fabulous, fantastic, beautiful film. You’ve never seen anything like it.”1

As a film scholar from France, this description echoes in Europe the work of the German film collective Schmelzdahin, composed of Jürgen Reble, Jochen Müller and Jochen Lempert, especially their film Aus dem Algen (1986), in which, as the film’s title indicates, the film strip has been plunged into a pond in order to let algae and bacterial decomposition produce abstract patterns on the film strip. We may also recall Schmelzdahin’s film Stadt in Flammen (1984), in which, as the film’s title indicates, the film strip has been buried into a garden during a hot summer and overheated in order to produce colors and patterns on the film strip. In an essential writing entitled “Chemistry and the Alchemy of Colour” 2, Jürgen Reble explains his experimental methods of film-making, mostly cameraless and centered on the chemical treatment of the film strip and the developing process, which are very similar to silt’s described above by Brakhage. Moreover, again like Jürgen Reble his film performances such as Alchemie (1994-), silt showed their films mostly in projection performances, emphasizing the processual style of their work. Indeed, already in their films, it is natura naturans, Nature naturing (that is to say, as formative, creative processes), instead of natura naturata, Nature natured (or represented, as created). Their film does not reproduce Nature, like in films made with a camera; rather they make visible natural creative processes.

In program notes for a film performance of 2000 by silt, Larry Rinder wrote quite extensive analyses on silt, from which we can extract this abstract, encapsulating silt’s originality:

“Both silt’s process of developing work and performing it are conceived as a kind of alchemical ritual. They see themselves as “paranaturalists,” giving voice to the natural landscape through a combination of hermetic, poetic and scientific investigations. In their performances, silt unlocks the organic dimension of film, blending its technological and mechanical aspects with a palpable sense of its connection to natural processes: their work physically, visually, and aurally demonstrates phenomena such as optics, magnetic fields, plant morphology, and bacteriology while creating spatial environments charged with mystery and allure.”3

Besides program notes, not so many publications seem to be available on silt, besides Brian Frye’s brief analyses on silt in his article “The New Science of Cinema” published as a contribution to the major book on the San Francisco Bay Area avant-garde cinema Radical Light: Alternative Film & Video in the San Francisco Bay Area, 1945-2000 4, although a film strip by silt appears on the cover of this book.

While I was in the San Francisco Bay Area in October 2015 to lecture at a conference at the University of California in Berkeley, I had the chance to make some research on silt, in the Archives of San Francisco Cinematheque. By a coincidence my Berkeley lecture was quite precisely related to the issues involved by silt, as it was on “Decomposition as Composition: Experimental Film and the Physico-Chemical Processes”. 5 In this paper, I discussed films by Stan Brakhage, Schmelzdahin, Jürgen Reble, Phil Solomon, Bill Morrison, Luther Price, and Jennifer Reeves. All these filmmakers have been using analog film (as opposed to digital) with film decomposition as a specific means of composition of abstract films. This trend in abstract film may be interpreted as an expression of the materiality and the chemical nature of analog film in the digital age. With the obsolecence of analog film, the deliberate use of film decomposition by experimental filmmakers takes an intensified significance, since film decomposition seems to express and symbolize the medium’s end, both in a historical sense and in the Greenbergian and Hegelian sense of an ontology and teleology of media.

At the Archives of San Francisco Cinematheque, Steve Polta suggested I may be interested in their file on silt for my research topics. I was indeed very interested. At last, my wish to study silt, from the Brakhage interview mentioned above, became possible. The file on silt in the Archives of San Francisco Cinematheque provides a wonderful collection of ephemera, program notes, clippings and correspondences. During this stay in the San Francisco Bay Area, I also had the chance to meet and discuss with one member of silt, Keith Evans, who also shared documentation on silt.

Now, with this short publication, I want to share my research on silt, with some documents toward a history of this San Francisco Bay Area film collective. Inspired again by Scott MacDonald’s useful documented books (such as his series of books of interviews with avant-garde filmmakers A Critical Cinema and his books on avant-garde cinema structures such as Cinema 16 and Canyon Cinema), and because of the short format of this paper, I want to let some documents on silt speak for themselves. Below is a selection of four documents: ephemera and film strips, that beautifully encapsulate the essentials of silt. 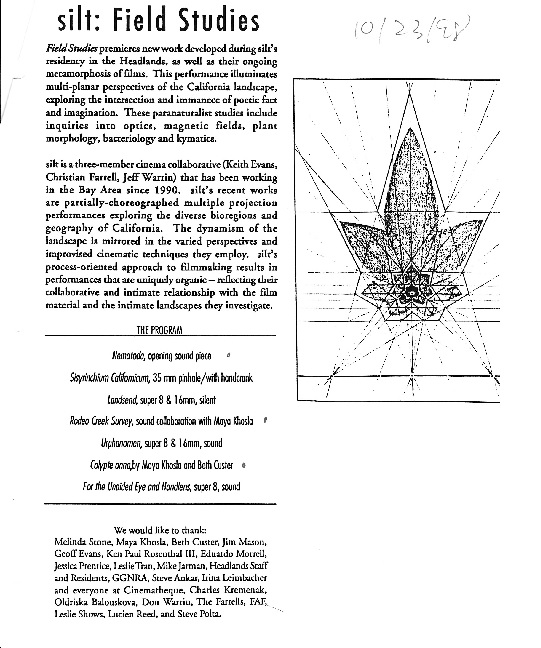 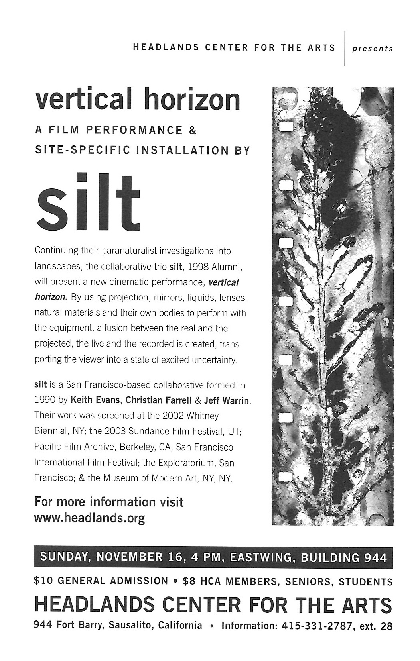 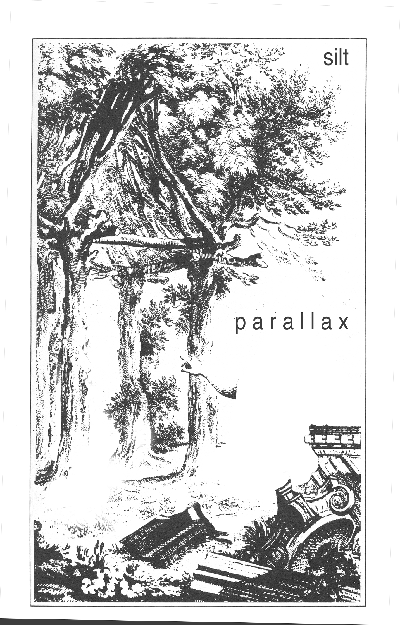 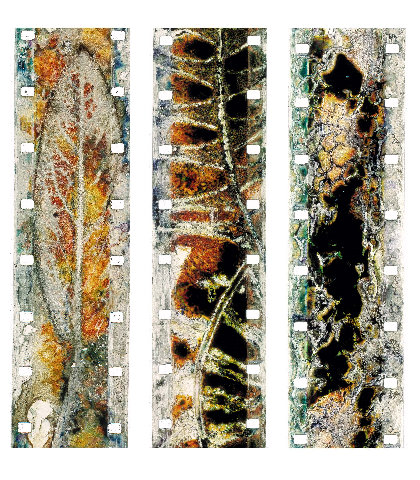