Between 2003 and 2009 the writer and academic James Riley ran Fleapit, a one-man microcinema that specialized in off-beat films. He had no venue, no funding and no regular schedule. Instead, the ‘cinema’ was housed in the trunk of his car. Driving across the UK, James used a video projector to mount screenings in ‘unofficial’ venues: cellars, bars, kitchens, classrooms, front rooms and bomb shelters. 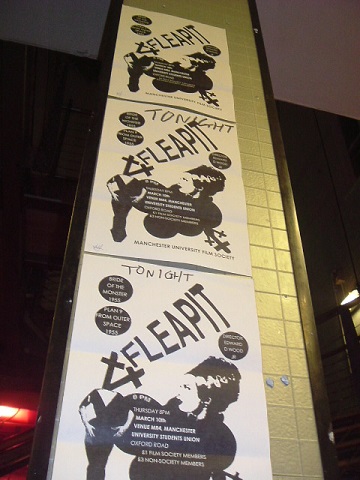 Posters advertising a Fleapit show, somewhere in the North of England.

I met James for the first time in 2003 at a Fleapit show in Edinburgh. He was showing a programme of Ed Wood films in a rundown nightclub. James was dressed in a weird suit, a terrible shirt, had on a pair of ill-fitting cowboy boots and looked as if he hadn’t slept for a couple of days. After struggling to get his equipment working he sort of fell out from behind a glittery curtain onto the club’s tiny stage. He stayed there for the rest of the evening trying to rouse the interest of the oblivious crowd by delivering a bizarre, improvised commentary as the films played out on screen.

Frankly, it was a shambles. But there was something eccentric and strangely committed about the whole performance. James, it turned out, was serious about ‘bad’ films: B-movies, trash cinema, grindhouse fare and obscure exploitation films. He saw Fleapit as a practical research project based around an archaeological study of popular cinema, a search for what he called “the treasure in Hollywood’s dustbin”. But rather than write scholarly papers (which James also did and does), Fleapit was a research project that happened to take the form of a long, chaotic road trip.

Now out of the trenches, James is writing an account of the project under the title Road Movies. In this interview – adapted from a longer series of conversations – James and I discuss the theoretical aspect of the screenings. In keeping with the focus of the book-in-progress, we talk about the cultural terrain inhabited by the events considered: a territory in which image projection elides into forms of psychological projection.

ES: What was the first show you did under the name Fleapit?

JR: A screening of Shigehiro Ozawa’s The Streetfighter’s Last Revenge (1974) in a lecture theatre somewhere on the campus of Lancaster University. I think there were two people in the audience. I did not see this as a failure.

JR: Because the point of that first screening was to put on an event. At the time I’m afraid I saw the notion of an event as something that was quite separable from the presence of an audience. I would have been happy to sit on my own and screen the film or, indeed, to leave it running in an empty lecture hall whilst the rest of the campus passed by outside. What interested me was that I was making use of the room in a way that was different to its normal function and that I was taking a film, or more specifically a video – a primarily domestic format – and playing it in a semi-public venue.

The original thinking behind Fleapit was all to do with the connection between film and place. In 2003 I had just read Jack Stevenson’s Land of a Thousand Balconies (2003) and his descriptions of guerrilla film shows, particularly David Kleiler’s ‘Rear Window’ really struck a chord with me. I was becoming increasingly fed up with the insulating feeling of the multiplex: the same building showing the same films in the middle of leisure parks that looked like xeroxes of each other. I really wanted to re-think my experience of going to the cinema. This took the form of thinking carefully about the way in which a certain film could interact with its screening location and vice versa. Some of the shows I did were specifically designed to elicit this. For example, I screened X: the Man with the X-Ray Eyes (1963) in a lecture theatre full of anatomical skeletons and on another occasion showed Night of the Demon (1957) in an old library. Aside from these ‘complementary’ shows there was also the intention to put on films in out-of-the-way places. Later on, the process of touring was, in essence, a way of amplifying my experience of seeing these films. 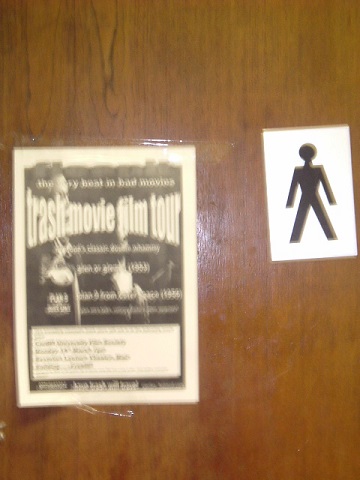 ES: Could you then say that your ‘curatorial’ decisions were not being made in the service of an audience or public? They seem to be very much part of your own, personal research.

JR: Very much so, and I’m aware that that might seem extremely solipsistic if not egotistical. Obviously I did want to attract and entertain an audience each time I did a show and I hope people enjoyed the events I put on. But that said the project was something of a means to an end. I was trying to unpack a set of theoretical issues via a set of practical exercises. For obvious reasons, a vast amount of thinking has been done on the act of seeing a film. By contrast, I was trying to focus on the mode of delivery that facilitates this spectatorship, the projector that – and who – throws the film forward.

Frederick Baker outlines a similar area of emphasis in The Art of Projectionism (2008). He argues that the etymological connection of ‘pro-ject’ to throw (via the Latin jacere) encapsulates the literal and figurative senses of expulsion that inhabit the word. To ‘project’ means to throw something through space as well as to make manifest an idea through planning or contrivance. So for Baker, image projection works as a means by which an idea can be made manifest. Similarly, the curatorial decisions underpinning the choice of what to project, how to project and, most importantly, where to project function as a further territory for the realization and communication of one’s own intentions. 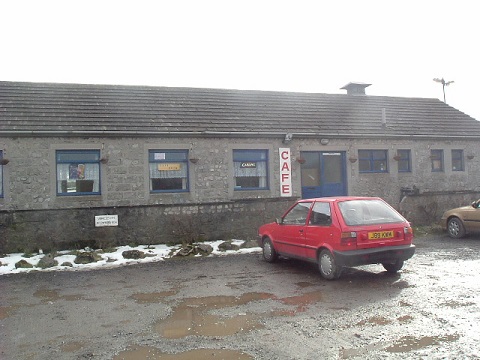 Cinema parked outside a venue.

From this perspective the act of projection, particularly in the type of context described, invites consideration as a practical as well as an imaginative or psychic process. To use Melanie Klein’s oscillating terms that characterise her discussion of projective identification (1946), the question could be posed as follows: what is at play in these specialized contexts when carefully chosen images are thrown onto the screen and into the audience (or at least into the space the audience is meant to occupy)?

ES: So again the emphasis is on the event, almost the ‘happening’ that is the screening?

JR: I guess you could say it was an attempt to emphasise the ‘blind-spot’ in the ‘conventional’ cinema experience that becomes apparent in a moment of literal per / version within the conventional setting of the spectator: a turning away from the screen to look at the beam of light that falls upon it. A familiar enough gesture and one can easily hypothesise three reasons for such a shift: boredom, repulsion and possibly anger. Boredom, repulsion and possibly anger are not unexpected responses to the kind of film that one might term ‘bad’. Anger is also a (not unexpected) response to an interrupted projection or disorganised screening, that which results – in extremis, as Stevenson describes at one point – in the threat to “beat up the projectionist”. I’m afraid to say that all of the above have played out in the screenings I’ve been party to as a spectator, projectionist and main organizer.

ES: All of these ideas seem to be consciously loaded into the name ‘Fleapit’.

JR: Absolutely. I was keen to exploit the combination of representation, evaluation and location wrapped up in the word’s usage throughout the 20th century. Specifically, I had in mind the line from Ado Kyrou’s Le Surréalisme au cinema (1963) in which he states that the “best and most exciting films” are “the films shown in local fleapits, films which seem to have no place in the history of cinema.” This became something of a motto for the project. In addition to gesturing towards Surrealism’s investment in mass culture, Kyrou was highlighting the deeply canonical nature of cinema history. The grouping of its ‘classics’ is based on a process of exclusion that inevitably invites spatial metaphors when one comes to discuss that excess. By contrast, the local fleapit marks out a place at the margins of critical value. It’s as if there is a resonance and functionality connected to that which lies outside of ‘official’ delimitation, above and beyond any sense of ‘guilty’ pleasure.

ES: Is your choice of ‘bad’ films then intended as an analogue to this notion of critical marginalisation?

JR: Yes, and in saying this, I’m drawing in a wide range of criticism dealing with this material. Jeffrey Sconce’s work on what he terms ‘paracinema’ was very informative for me in this regard. His term for ‘cult’, Sconce offers ‘paracinema’ as a term to describe the critical efficacy of ‘reading’ B-films, exploitation films, films like Larry Buchanan’s Zontar: Thing from Venus (1964). He describes how the appreciation of this material proceeds from an inverse form of value: they are deemed to be ‘good’ precisely because they are ‘bad’, that’s to say, one line of cult spectatorship is to offer the demonstrably low quality of a given film (terrible special effects and so on) as the basis of its appeal. The added suggestion is that this form of consumption is important because it makes visible the mechanisms of evaluation and cinematic canonicity. Whether expelling works from the academy as in the case of Harry and Michael Medved or engaging in a recuperative archaeology as in the case of Rudolph Grey, Sconce argues that both of these engagements with cinematic ‘trash’ foreground – and thus make available for interrogation – the gatekeeper’s criteria. In my mind at least, by putting on Fleapit shows I was trying to put these theoretical ideas into some sort of practice. It was a case of driving out to the margins with all the films that had been positioned at the critical peripheries.

After touring the UK with Fleapit, James Riley completed a Ph.D at the University of Cambridge where he is now Fellow of English Literature at Girton College. In addition to cult film, his research focuses on the outer limits of modern and contemporary literature. Widely published, James is currently working on Road Movies alongside a critical study of William Burroughs and tape recorders. James also writes a blog at www.residual-noise.blogspot.co.uk. For more information on the Fleapit project, see his article “White Walls and Empty Rooms” over at One+One.

For more road trips and cinema see Other Cinema’s show, 4/16, with Rick Prelinger!