Force and Violence in a Can

Pepper spray. (Oleoresin capsicum or OC). During Redwood Summer, back in the 90s, people went north in an attempt to keep the old growth redwoods from being killed (aka logged). A group of young people chained themselves in front of a timber industry office with their hands in pipes so their ties together could not be broken. The cops, seeing these protesters sitting there defenselessly, daubed pepper spray in their eyes – causing unimaginable pain, and ruining the eyesight of two of them. [www.nopepperspray.org/levendosky.htm] 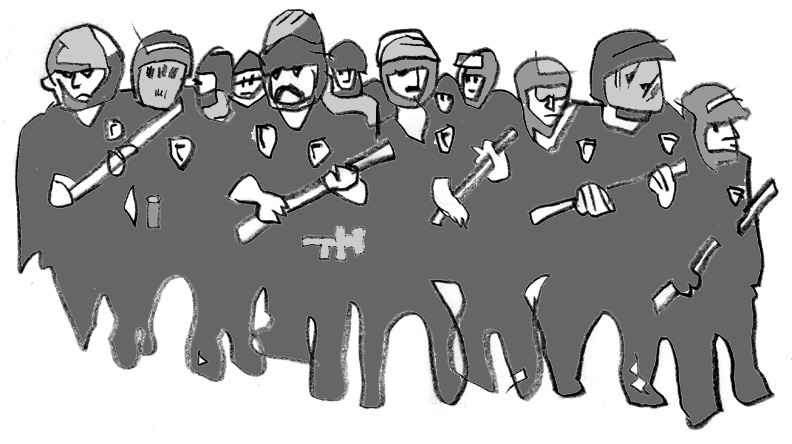 It was also during the 90s that Berkeley City Council decided to authorize Berkeley police to carry OC. In 2017, the City Council extended this authorization to use in crowd situations. This was precipitated by the events of last summer when white supremacists and neo-Nazis came to Berkeley to recruit to their organizations. Counter-demonstrations were organized to defend the city because people remembered that these invading organizations loved violence, and practiced it within the traditions they had adopted (pogroms, KKK raids and lynchings, World War II, etc.). There were confrontations, a few fights, a lot of media attention to violence, but mostly discussion and argument. The people of the Bay Area wore down the invaders, and they stopped coming.

To close out this year of paradoxes, on Dec. 19, the City Council passed a resolution opposing fascism, white supremacy, and anti-semitism. And in the same session, it reaffirmed its former policy on OC use in crowd situations. Though many spoke against the use of OC—an element of police militarization, necessarily indiscriminate in its use, and as an instrument of torture—suggesting that its original authorization was unethical, the mayor assured the world that Berkeley had a “well-crafted policy” on the use of OC by the PD. “We crafted a policy very carefully to meet constitutional standards, and specifically target people who engage in violence.” [2:50:52 in the council video]

One perceptive young man pointed out, however, that if the police have pepper spray, then people will bring pepper spray to the demonstrations to equalize with the police. That is, the police become a role model. Somehow, the idea of people defending themselves against police violence did not occur to the council.

But the mayor assured us that pepper spray will only be used “properly.” I suppose we can trust the police to do this, just as we can trust them to stop racial profiling (just kidding). Sporting a stern expression, the mayor says: “We are against anyone that commits violence against anyone in our community. Or against our police. That is not acceptable. That will not be tolerated.” [1:00:25] But it will be tolerated from the police themselves. That is why they want weapons.

By “properly,” he means only on individuals (which no one believes possible for a spray), and only against violent people. But who gets to define violence? Is it the people involved in their disputes with invading neo-Nazis, or is it the neo-Nazis and white supremacists themselves who come with their protestations of peace, that their entire history of violence belies? No. it will be the police who define violence, and thus when to use the pepper spray. They will have autonomous use, while City Council euphemizes “autonomously” as “properly.” Big deal!!

On what basis will a cop define another person as violent, so that he can use pepper spray on him? Will it be when the other is walking away though told to stand still by the police? Or when the person is defending himself against a neo-Nnazi? Will it be when someone tries to tear down a confederate flag used to insult and harass a fellow black Berkeleyan (for instance)? Or will it be when a cop tells a person to move and they just standing still? Police have often interpreted that (standing still) as violence. People have been killed by cops who felt “threatened” in just such situations as these. 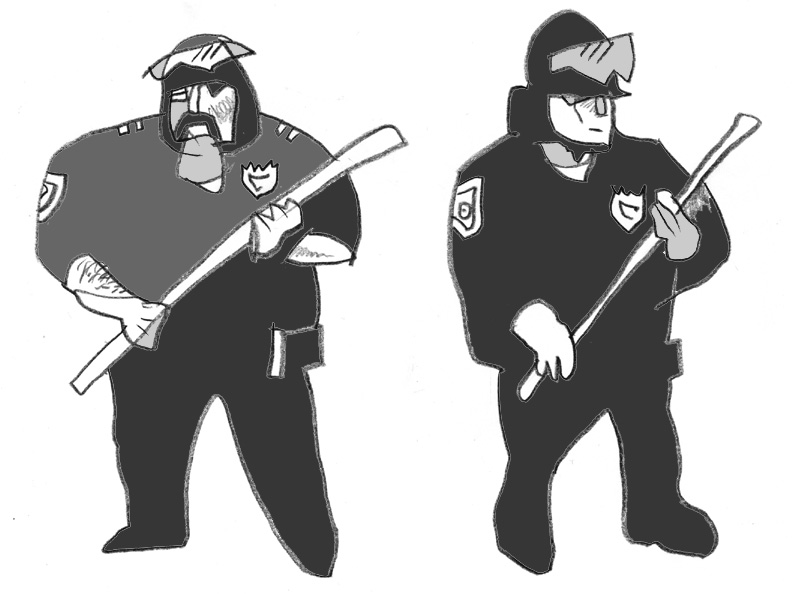 The fact that the police will be defining what is violent is left unsaid by the council. Or perhaps, “abdicated” is the proper word. A “carefully crafted” abdication?

If pepper spray is an instrument of torture, then it is illegal under international law, banned by UN treaty to which the US is signatory (1994), making it unconstitutional (Article 6). And Berkeley City Council swore to uphold the Constitution. The entire council stands in violation of its oath.

To authorize the police to use OC on people is to authorize state sanctioned torture. When four cops beat Rodney King on an expressway as he crouched trying to avoid their baton blows, they were subjecting him to state sanctioned torture. And similarly for the myriad such incidents not videoed. Batons are not exempt from the category of torture instrument, and neither are tasers. State sanctioned torture violates the Nuremberg Agreements written at the end of that terrible war against fascism in 1945. Those Agreements focused on regimes that used torture to establish social control. Torture used for social control is not law enforcement. It is militarization.

By making that change, though the statement still names fascism and white supremacy, it no longer opposes their activities to recruit and build their organizations, which was the purpose for which they came to Berkeley, and the issue inspiring the commission’s statement. By removing “promotes,” the focus of the sentence shifts from opposing invading racists and neo-Nazis to opposing violence in the abstract.

What does it mean by violence? Does it mean antisemitism? No, because antisemitism is only a social concept, while violence is enacted by “individuals.” Does it mean white supremacy? No, for the same reason. Violence in the abstract has no meaning. We are left with Stephen Colbert’s spoof of Trump’s failure to name the violent organizations that vandalized and killed in Charlottesville, while pretending to condemn violence “in the strongest terms.”. Colbert, interpreting Trump: “I condemn in the strongest terms … um … you know who … um … doing you know what.”

Exactly what is it that the Mayor is saying we will not tolerate?

It is noteworthy that the Mayor made this change on his own, without participation by the rest of council. [1:32:10] Yet he refers to it as something “we, the council” have done. He took a decision by the agenda committee and altered it unilaterally. He admits that did that just before the council meeting. Yet none of the council members had the temerity to say, “wait a minute, that wasn’t what the agenda committee decided. And we weren’t consulted. So now you are speaking for us?” Though a few amendments were offered, the Mayor’s changes represented a serious shift in the statement’s ideological position. And the mayor just sprung it on the council (and on the PJC). The PJC representative was stunned. And the council confronts a mayor who speaks for them without their participation.

To speak for other people is a form of thought control. It does autocratic violence to the decision-making process. And leaving the notion of “violence” abstract is precisely what gives the police the power to define it however they want, and to pick out at will who to shoot. “Um … you know who … um … doing you know what.”

But the real reason the police want pepper spray as a weapon lies elsewhere. According to Chief Greenwood, “It is this new emerging tactic of a large group of folks bearing shields .. which render our less lethal weapons less effective.” For torturing? The less lethal weapons are batons or teargas. Greenwood doesn’t want to be limited to those two. He wants the police to have “a tool that allows us a direct focus use of force on a person.” [2:41:20] The mayor clarifies this. “We need to make sure that the police have the tools that they need to keep themselves safe, and to keep our community safe. … The alternatives are using either tear gas which is diffuse, and will effect an entire crowd, … or more heavy uses of force.”

In other words, the Mayor and the Chief agree insidiously that if the police do not have this weapon (euphemized as a “tool”), other weapons will be used. When weaponry comes first, it signifies that the police will only deal with people at a distance. They do not want to get their hands dirty. They impose pain to sanitize their own violent approaches.

This isn’t law enforcement, it’s the law of force, the force of war. For the Mayor and the Chief, a person to be arrested must first be subjected to pain. He must first be tortured, punished for being arrested before arresting him for his crime. Gone is the idea of walking up to a person and arresting him, like the old days. Instead, weapons become a rule of engagement. We, the people, become the enemy, subject to police definition of who we are and what we are doing. It is just another form of profiling.

A lot of people now talk about the police gaining the trust of the people. Its easy. Just call off your war. Put the weapons away. Drop the military ideology. But also, prosecute those cops who kill, maim, injure, or torture. Be an organization of peace.

Oh, well. Easier said than done. When did an army ever disarm in the face of the unarmed. Unarmed?? But the Chief mentions shields, saying the police need protection against them. Give me a break. 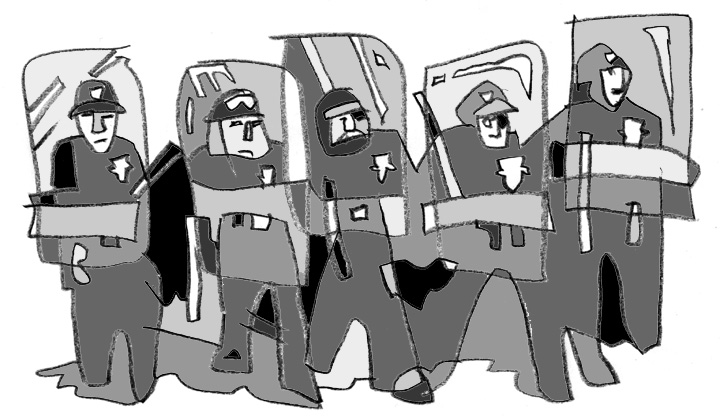 Shields are defensive implements. We should not forget why demonstrators carry shields. They are used to ward off baton blows and beanbag rounds, they are signs of past violence by the police against demonstrators (going back to the 1960s). Many demonstrators now wear helmets for the same reason. Yet the Chief states that the police need weapons to protect themselves against shields and helmets. For him, shields are offensive, aggressive against the police, meaning OC becomes defensive.

He doesn’t speak the same language as the people. And reading Orwell probably won’t help him. Once you invert offense and defense, nothing about the disputes between people can ever make sense. Ask the thousands of imprisoned women convicted for defending themselves against abusers. All that’s left is war, which the police, by inverting offense and defense, bring to us. And the council falls for it.

The people know that the invading groups of neo-nazis and white supremacists have a past of violence, a murderousness that takes the Blitzkrieg and the burning cross as its icon and its tradition, killing endlessly, right up into 2017.

So here we are, in the middle of a situation in which there is violation of the Nuremberg Agreements, torture used for social control, a council subjected to thought control, autocracy in government, militarization, a police power that can determine who we are and what we are doing, and a police force that refuses to get up off its own racism. Wow, it’s a good thing this isn’t a fascist society.

Steve Martinot <martinot4@gmail.com> is a human rights activist and community organizer living in the Bay Area. He has worked as a machinist and truck driver in New York City and Akron, and taught writing and literature in Boulder and San Francisco. He has organized unions, led a wildcat strike, and edited underground community newspapers. He has seven books published on philosophy and historical analysis. Cops graphics © Mike Mosher 2018.