In 2017 he participated in the writing and production of the theatrical work “Visions, Dreams of Imagined Things” by Awaken Dreamers, collective name for the fifteen Donovan’s Yard C Writers.
It employed spoken word and onstage slide projections, and  was part of the Playwrights Project’s Out of the Yard program on Yard C, with teaching artists Cecelia, Chris and Albert at the RJD-CF, a program sponsored by the California Arts Council, California Department of Corrections and Rehabilitation, and the William James Association.

The production draft was performed by the Awaken Dreamers at RJD-CF on December 12, 2017, with metaphoric characters expressing the frustrations of prison (and outside) life.  Characters included Painting of a Man, Painting of a Family, Plon (a 12-foot angel sculpture) and Iggy (a 12-foot monster sculpture), and other twentieth century paintings, projected to accompany the actors,  Other characters in the play include a DJ and a Record Cover, The Brazen Bull; Twin Towers Flag, Old Unglory Native American Flag, and Flag for All; Hand of God, Earth (in a bullet-proof vest) 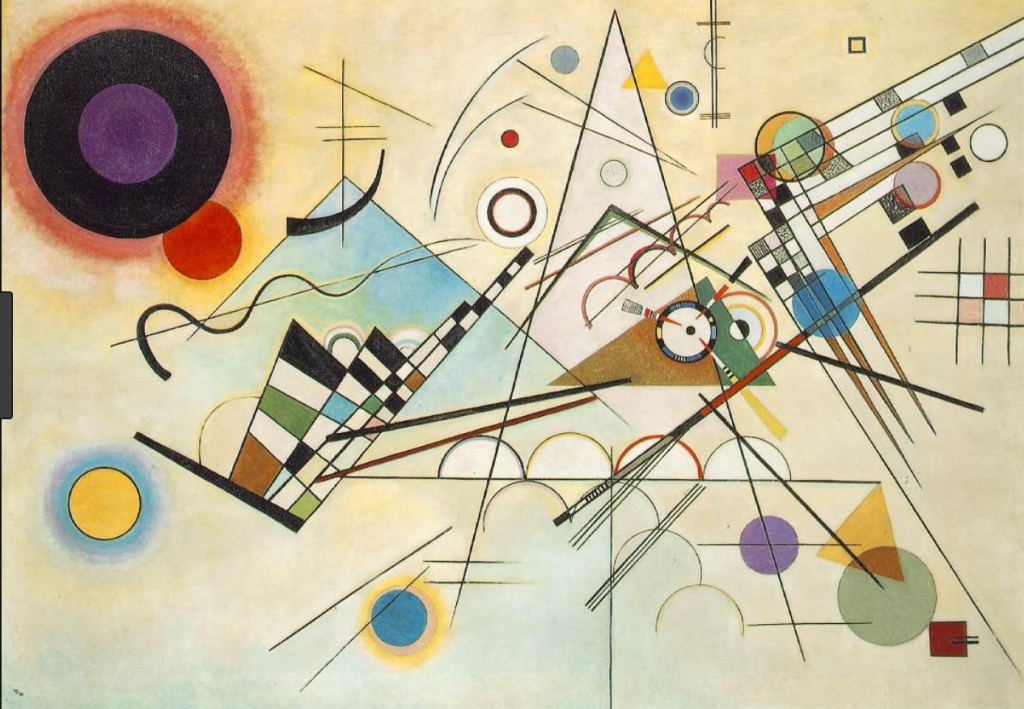 Scholl voiced the part he wrote for Wassily, Wassily Kandinsky’s painting “Composition VIII” in the Gallery of Abstract Art scene, and then voiced Who’s Your Dada? in the scene called Celestial Intervention 2.

Hey, Piet, you got a match?  We’ve got to burn these Nationalists before they get us.

As the flags exit center stage to be replaced by the three paintings,, Wassily says:

People see me as one [gesturing rounded circular shapes] or the other [sharp triangular shapes] but never as I am [combinations of both, continually moving between shapes].  It makes them angry that I won’t conform, won’t fit into their tidy little boxes.

Oh, the questions!  Well…they’re better unspoken.  The cliché will do fine for most. If you’ll just read between the lines you’ll see I’m neither and both.  Some see beyond the surface, and try to riddle it out, but return to the comfortable likes at the sight of uncomfortable truth, and who I am to box them in.

When Piet urges Wassily and Jackson Painting (Pollock’s Untitled 5) resist that thing someone put in your head, Wassily replies:

For years I’ve tried to remove the mechanism they installed in my head.  It gets kind of messy, like cleaning squid, and now I’m homesick for places I’ve never been.

When Jackson compares their mental situation to being inside a burning tent, and Piet to reabsorbing “a half gone black blackout of systems going blank, with half your sufferance denied”, Wassily responds:

You can own what’s yours and be who you truly are.

Later, as the Earth addresses the Hand of God, Wassily (now Who’s Your Dada?) announces:

The sky broadcasts something heavier than sky, it’s easy to see but with the double pained glass, I hardly feel it.

Intentional or not, the pun “double pained” glass blocks (or amplifies?) feeling, as a double-paned window might block heat.  And drama gives these stressed and guarded (!) men opportunity to discharge some pain and anguish.