Resistance to Resistance: Jordan Peele’s “Get Out”

Jean-Luc Godard saw Michael Moore’s Fahrenheit 9/11 at the 2004 Cannes Film Festival and said “This film is going to help Bush get elected.” It didn’t necessarily help Bush get elected, but it galvanized pro-Bushers. A question to consider: do political documentaries more activate or more pacify the viewer? Do they simply strengthen the already-existent political viewpoints of the viewers, or can they change people’s minds?

Theo Anthony said that “Michael Moore’s films don’t convert anyone. They really solidify boundaries. If you’re a Bush supporter watching a Michael Moore film, you’re just going to end up hating Michael Moore, rather than just thinking about the person that you’re supporting.” Gene Youngblood responded that documentaries by themselves don’t have the power to activate people: “Is knowledge power? No, but shared knowledge is definitely power. If I’m sitting at home and I’m watching Free Speech TV,  I can see twenty documentaries a week, and so I’ve got all this knowledge. What power do I have? If I share that with you and a million other people, then we’ve got power.”

The question, of course, need not apply only to documentaries; one could just as easily ask it about fiction films. A useful case study is Jordan Peele’s Get Out, a horror-comedy about a white family who kidnaps black people and transplants the white’s brains into the black’s bodies. This is a literalization of the many ways in which white people have historically colonized black bodies, with slavery being only the most obvious example. But the wrinkle in Peele’s film is that the family members masquerade as progressives. The patriarch self-satisfiedly mentions that he would have voted for Obama for a third term if he could have. The implication is that supposedly aware white liberals are potentially as dangerous as overt racists.

Peele gave himself the unenviable task of making a broadside against white liberals that would be palatable to those same white liberals who are largely the arbiters of taste in the film world. Somehow, he succeeded. Get Out has 298 reviews on Rotten Tomatoes, 295 of which are positive. But in order to achieve that success, the radical potential of the film necessarily had to be blunted. As is by now well known, Peele originally envisioned a different ending for the film. As the film actually ends, the protagonist, Chris, manages to escape his captors but is chased down by one of them, who he starts to strangle before a police car arrives. At the screening Will saw, the air audibly went out of the audience at this point. The natural expectation was Chris will be arrested or killed by the cops just as he’s seemingly manages to get free. And indeed, that was the ending Peele originally planned, but he decided that audiences would need a happy ending – so the police car turns out to be driven by Chris’ friend Rod, a TSA agent.

The original ending, of course, would have been a genuinely bleak acknowledgement of the way in which law enforcement in the United States consistently fails in its ostensible mandate of protecting citizens, when it comes to black people, and especially when it comes to black men who are perceived as threats to white women. But Get Out never goes beyond a mere flirtation with any such radically discomforting material. 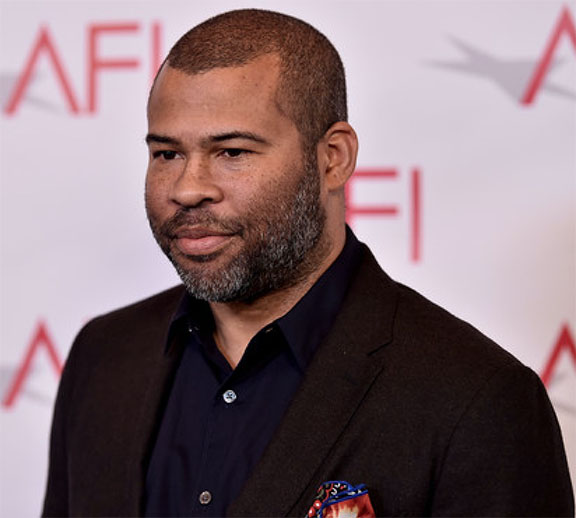 One of the very few negative reviews of Get Out came, unsurprisingly, from Armond White, who points out the irony of Peele’s film being “tailored to please the liberal status quo” and contrasts it with the astonishing “Be Black, Baby” sequence of Brian De Palma’s Hi, Mom! That sequence depicts a performance by a radical black performance group in whiteface who terrorize the white audience members by making them wear blackface and subjecting them to all manner of humiliation. At one point, some of the members of the troupe rape one of the audience members. Robert De Niro’s character shows up in the guise of a policeman who arrests members of the audience, assuming that they’re black. At the end of the sequence, we see clips of the audience effusively praising the show.

“Be Black, Baby” is a legitimately disturbing sequence, much more so than anything in Get Out. In part this is because of its ambiguity: To what extent is the rape real? To what extent is the audience’s reaction to the performance genuine? In part this is because of its form: it’s shot in black-and-white with a roving handheld camera that implicates the audience of the film itself in the action. (Intertextually, of course, the audience of Get Out might just as well be implicated.)

The book Strange Questions: Experimental Film as Conversation includes an interview with Larry Gottheim, where he said that Michael Moore “uses film in a closed way instead of an open way.” For Gottheim, Moore’s documentaries are unsuccessful because their form is dictatorial, not giving a viewer a choice in how to view them. Viewers who aren’t open to their ideas, then, are more likely to rankle at them than to engage with them. In a sense, Get Out suffers from the same problem; the white liberals who think they’re open to the film’s ideas are unlikely to be changed in any significant way by the film. This is not to say that it’s a bad film (unlike Armond White, we think it’s a very good one); it is merely to point out the difficulties inherent in making political art.

How do we cope with these difficulties? McLuhan wrote, “Art as radar acts as an ‘early alarm system,’ as it were, enabling us to discover social and psychic targets in lots of time to prepare to cope with them.” How does art function as perceptual training? In regards to the content (the intention and agenda of the maker) or to the form, should there be emphasis of either to be more effective?

Use the existing languages and media and invent new ones? Why? To get to some kind of truth?

Wesley Morris, in his thought-provoking New York Times article on Peele, wrote: “Racism is old, but Peele found a poetic new way of talking about it. He gave us language we didn’t know we lacked. . . . His movie is full of white people whom Peele reveals as insatiable predators of blackness.” Peele says, “One of the reasons this movie clicked with more than just a black audience, is because you get to be black while you’re watching it.”

Gene Youngblood likes to repeat the Buckminster Fuller mantra: “You never change things by fighting the exciting reality. To change something, build a new model that makes the existing model obsolete.” Berthold Brecht said, “Art is not a mirror to hold up to society, but a hammer with which to shape it.” Can we shape perceptual training with art toward change for the better? Or do tools do that?

Jordan Peele said: “All artists are a collection of their influences – your life and your influences. The question is how do you weave together those influences with a cohesion that makes sense? If you can do that you can fool an audience into thinking they’re watching something entirely new.”

What is new? Keep making films? Keep making political art? And keep resisting resistance? What is it really mean “to make a stand against making a stand”? That Bunuelian flip makes one wonder – “I am for anyone who seeks the truth, but I part ways with them when they claimed they found it.” Peele wrote, “Film can be a force for change. At the end of the day, call Get Out horror, comedy, drama, action or documentary. I don’t care. Whatever you call it, just know it’s our truth.”

Tangling with the truth? How to cope with the difficulties of resistance and resistance to resistance? We invite you to tell us. Please do not resist this invitation.
Gerry Fialka <pfsuzy@aol.com>, artist, writer, and paramedia ecologist, lectures world-wide on experimental film, avant-garde art and subversive social media. He has been praised by the Los Angeles Times as “the multi-media Renaissance man.” The LA Weekly proclaimed him “a cultural revolutionary.”   310-306-7330

Will Nediger <wnediger@umich.edu> is a linguist, cruciverbalist and enthusiast of experimental and non-experimental film.  Together, Fialka & Nediger are currently writing a history of the future of avant garde film. Their essays have appeared in OtherZine and CineSource Magazine.

The interviews of Gene Youngblood, Larry Gottheim and Theo Anthony quoted in this essay appear in their entirety in the forthcoming book Strange Questions: Experimental Film as Conversation by Gerry Fialka, edited by Rachael Kerr, introduction by David James (due March 15, 2018).