Though it proclaims itself against police militarization, Berkeley City Council has renewed three militarizing federal relationships: the Fusion Center (NCRIC), urban surveillence technology, and Project 1033. It apparently does not see how these projects work together, nor that they are pro-militarist. And in its conceit, it thinks it can control them each separately. That is a mistake. 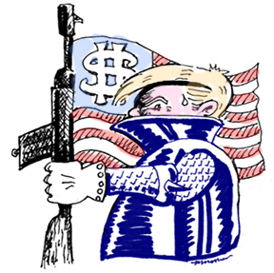 In his familiar twisted fashion, Trump briefly proposed lifting a ban (instituted by Obama) on obtaining trophy elephant parts. (The ghoulishness of that sentence just makes me shudder.) The “trompeur” opined that this would be a “conservationist” measure toward elephants, an endangered species, because the act of recognizing and honoring the hunters would obviate bootlegging. Transparency in destructiveness? Hunters don’t just hunt for fun. They do it for profit. Conservationism does not mean acquiescing to profit hunger.

Here in Berkeley, City Council and the Mayor proclaim themselves opposed to further militarizing the police. Yet on Nov. 14, 2017, Berkeley City Council renewed its membership in Project 1033, a program begun in the 1980s of bestowing military equipment on police departments. The Berkeley police department has been amassing military weaponry and military grade surveillence equipment for years now – assault rifles, grenade launchers, stingray technology, etc.

The 1033 program is pro-militarist because it wants police departments to think of themselves as military entities. The Pentagon will maintain oversight and control on the equipment it distributes because its real purpose is militarizing the mind of the cop. The current police demand for absolute obedience to any officer’s command, which militates for civilian regimentation, is the social dimension of that process. Technology is the machinic dimension. Its political purpose is for social control, not for law enforcement.

City Council thinks it can establish the right to oversee, and to confirm before the fact, whatever equipment the Berkeley PD will request from Project 1033. They evidently haven’t read the webpage of the DLA (Defense Logistics Agency which administers 1033) where it says that no civilian oversight of the program will be allowed for security reasons. The council’s enactment is thus pro-militarist because it gives recognition and credence to a militarist program and to its purpose, even while intending to limit it. By maintaining its membership in 1033, the City Council has actually approved the military’s purpose.

A few weeks earlier, the City Council affirmed a request by Berkeley PD to purchase “automated license-plate readers” from the government. When mounted on a police car, these LP readers record all the license plates of cars parked along the street. Those plate numbers then get put in a database, which then includes information that such-and-such a car, belonging to such-and-such a person, was parked at a particular location at a particular time. The owner of the car can be included in the data because City Council in its wisdom allowed Berkeley PD to maintain its connection with NCRIC (Northern California Regional Intelligence Center), a federal body for coordinating local police departments. NCRIC will provide car ownership information faster than the DMV. And somehow, the City Council thinks that renewing these agreements with the military and federal surveillence agencies is a first step toward demilitarizing the police.

City Council assumes that the LP readers are benign, and their databases can be controlled by civilian government – that is, that this kind of participation in a surveillence process has nothing to do with militarization.

The rationale for buying the license-plate readers is to better control downtown parking. Taking its lead from its business association, which complains that parking violations are having a detrimental effect on downtown businesses (new arrivals can’t find space), the Council decided that better enforcement, with more efficient ticketing, would alleviate the shortage. That in itself is questionable. Downtown parking is limited to two hours for cars. But reading a license plate won’t tell the database how long into its two hours a car has been there. So someone will have to check again in two hours, or read the little permits on dashboards. The collected database, which will do neither of these things, will have to communicate itself by radio or otherwise, to metermaids to ticket any violators. Rather than just hire more metermaids, who will have to do the footwork anyway, the city buys into a program of sophisticated data collection and complicated communications between agencies. And Council actually thinks, through some fantasy splurge that equates these readers with cellphones, that this technology will provide better monitoring of parking space usage in downtown Berkeley.

The PD contributed to this kind of twisted thinking by assuring City Council that none of the data collected by these LP readers would be passed on to the military, nor to NCRIC, even though some of the data will come from NCRIC. In other words, the police are running a number on City Council. And Council actually believes what the police say, that the feds will be denied access.

Think about that. The readers are run on software provided by the manufacturer through the feds. The software will compile the data, and organize it (by zone, neighborhood, address, owner, day, month, state, etc.), some of which will come through NCRIC – like owner ID. (This explains why the NCRIC connection was made first at BPD request, back in June.) What the government is good at is putting backdoor capability into software, meaning that the government, with preset access codes, will be able to get into those databases without either the City Council or the BPD knowing about it. It is probable that the BPD would know, but since it has promised not to provide access to this database to NCRIC, it will not inform the City Council, in order to stay true to its alleged “promise.”

In effect, instead of just hiring more traffic control personnel, Berkeley has decided to join the surveillence state (a euphemism for “police state” – Cf. Edward Snowden), while thinking it is only enhancing downtown shopping. 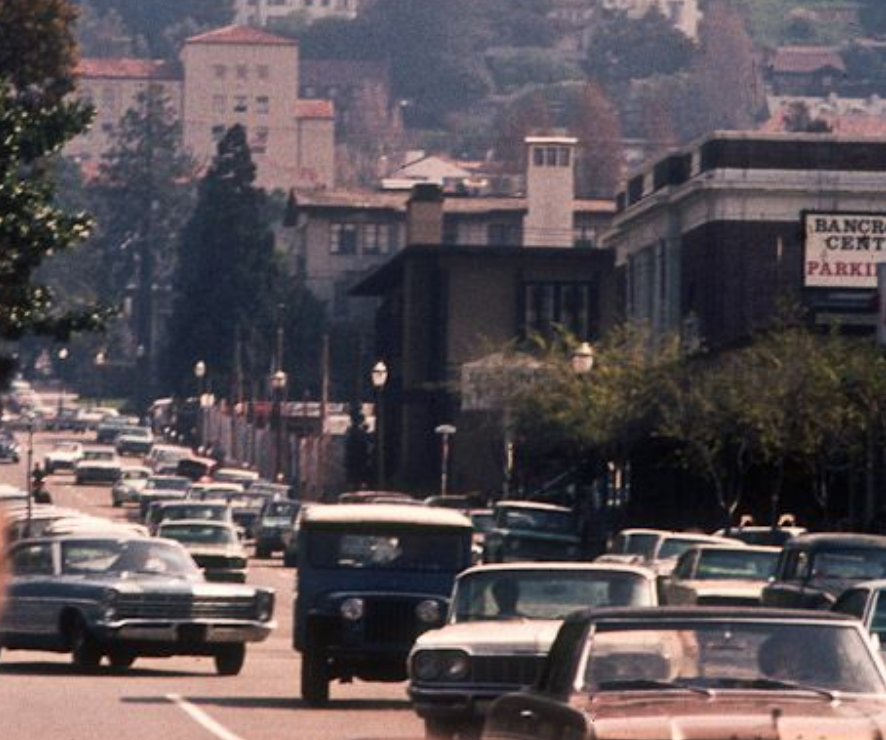 Reading license plates is an old game for the FBI. Back in 1959, they went around reading every license plate in a four block radius around a concert given by the Weavers in NYC, and passed their collected information on to the House Un-American Activities Committee (HUAC). When HUAC scheduled hearings in San Francisco, it subpoenaed the Californians that were on the list. What brought the SF hearings to public attention was that a biology professor at Stanford (whose car had been in midtown Manhattan the night of the Weaver’s concert) committed suicide rather than undergo the humiliation of committee questioning (he was apparently totally apolitical, but believed in freedom of thought). [Cf. Fred Cook’s article in the Nation, 1960] This aroused the interest of Cal students, and they appeared at the hearing in the hundreds, for which they got beaten up by the police and expelled from the hearings. That was the beginning of the student movement in Berkeley. Playing with this kind of database can be a question of life and death, even if one only wants to free up parking space.

What the council’s twisted thinking does admit is that downtown development is already out of hand, though the major construction projects have not yet even started. It also admits that City Council is not interested in people “using” downtown, but only going there to shop, to quickly use time to buy things and then go home. Finally, it admits that if extreme measures are not taken to provide parking, downtown will wither.

Clearly, the three measures that this City Council has passed this year, renewing its NCRIC agreement, buying license-plate readers, and renewing its 1033 membership, all work together. For council to pretend it has civilian control over police militarization is really the politics of the absurd.

In confirming and ratifying its agreements with the military under the 1033 program, the council is assuming that the military is going to be honest and honorable in the way it deals with the city. We have the police assurances that the military will not secretly use that database, nor will it be shared with NCRIC or other federal agencies. Yet the Berkeley PD has consistently resisted any accountability to civilian government, whether with respect to its “use of force” (the 2014 demonstrations), or its killing of Kayla Moore, or its persistence in racial profiling, or its acceptance of a police chief without public process, or its insistence on renewing all prior agreements with the federal government. What need has the military to be honorable and honest when it has the BPD mediating its relation to the city?

The US military is part of a government that has violated every treaty it has ever signed, from the first one made with Native Americans in 1795, all the way to the present. For instance, there are international staandards banning torture, to which the US is signatory, yet the police torture people on the street using pepper spray and tasers without fear of criminal charges (under the Human Rights Treaties, and Article 6). And this City Council thinks that the federal government will honor the votes taken by the city with respect to militarizing the police?

In addition, the US military, the most powerful military establishment in the world, is a military that has taken time and effort to repeal Posse Comitatus, which means it is now free to engage in law enforcement inside the US. What this means is that the boundary between the police and the military is dissolving; they are becoming one. And that implies that the boundary between the police and City Council is widening and becoming more impassable.

Just as Trump’s proposed legalization of hunting elephants would be anti-conservationist, so the city’s agreement with the military is pro-militarist.

What City Council decided concerning its 1033 access was that it would maintain its connections to the military, amd that each PD request for military equipment it would have to passed by the City Council. The assumption it makes in establishing this procedure is that it has civilian control over the police. But it doesn’t. There is no accountability.

What Berkeley City Council found it impossible to say to itself (perhaps because it has spent too much time looking in the mirror) is that this same council will be here 2 years from now, and 4 years from now, and on into eternity – so there is nothing to worry about. “We” will prevent Berkeley from becoming (overly) militarized, council says to itself. Somehow, this council is not taking future moments, future political situations, and future generations into account. And that is a great abrogation of responsibility.

Anyone who has listened to the arguments in City Council has heard the councilmembers actually say that they think these measures are a step forward toward demilitarizing the police. That is not a con. They actually believe it. It is just straight-out twisted thinking.

Technological militarization of the police has already been underway for years. If you want to demilitarize the police, the first step is break prior arrangements and agreements with the sources of militarization. Then reduce the level of militarization to what is democratically desired. That is, the second step is to establish autonomous and independent standards. The third step is to then see what is offered that one might use ethically from federal programs, and make agreements with the sources of that technology to get it if possible without violating one’s own standards. But this council thinks the their first step should be step three. Then they will work their way back up to step one. If that isn’t stupidity, it is at least complicity.

Steve Martinot <martinot4@gmail.com> is a human rights activist and community organizer living in the Bay Area. He has worked as a machinist and truck driver in New York City and Akron, and taught writing and literature in Boulder and San Francisco. He has organized unions, led a wildcat strike, and edited underground community newspapers. He has seven books published on philosophy and historical analysis.  Trump © Mike Mosher 2018.  Photo (cropped) from pinimag.com .