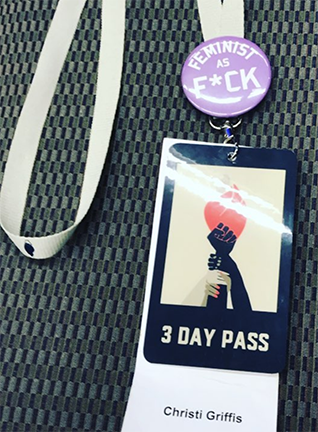 I’ll admit something to you right here and now: in the weeks leading up to the Women’s Convention, I was tired. I was tired from the constant barrage of bullshit coming from the current administration, and burnout of a makeshift activist, the stinging defeat of projects that don’t go as planned and alliances that fall apart. I was tired from the resurgence of the #metoo movement, waiting for that day’s report of which man whose work I admired was actually the worst and rehashing with my female friends our worst and scariest moments, with my male friends trying to convey the weight of womanhood. Tired from the controversy of the Convention itself, its leadership under fire for adding Bernie Sanders to the docket (he would later back out, instead planning a visit to Puerto Rico), thus bringing up the argument of men’s place in feminism, a fight that’s always just below the surface, a fight that can get nasty even among friends. Finally I was tired because of the things that make everyone tired; work, keeping a home livable, maintaining relationships, watching videos of drag queens doing their make-up until 2 in the morning.

Quitting is easy. I love to quit. But I feel this resistance shit in the deepest deeps of my insides. So I hustled up gofundme money from my activists acquaintances, friends, and high school classmates and registered my attendance and decided, nay, promised, that I would go in with an open heart and mind and determination to learn and squeeze every single drop of knowledge and experience out of the weekend. 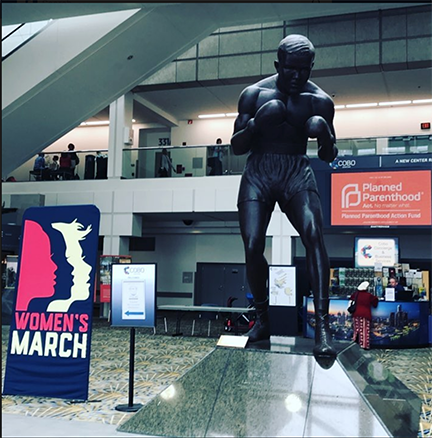 Detroit is a long drive from Bay City when you hit the road at 6:00 am and the downtown felt like an industrial oasis when I finally arrived at Cobo. The day started with an opening plenary that roused the spirits, set the tone, and covered all the timely basis. Tamika Mallory, who had earlier that week been removed from an American Airlines flight and had been the most vocal organizer in defense of Bernie Sanders’ appearance, called in a fiery speech for the inclusion of men in the fight and rallied the crowd to the importance of intersectionality. Rose McGowan and Tarana Burke spoke on #metoo and taking down Harvey Weinstein. Rose Clemente gave a first hand account of the disaster ongoing in Puerto Rico, and took unions to task for slowing relief, drawing boos from the heavily-Michigander crowd. Linda Sarsour had the line that struck me hardest: unity is not uniformity.

The next break-out session was a resistance group from a suburb of Chicago on a panel about hyperlocal activism. Included in the group were two high school students who saw a video on social media of a classmate using the n-word and made it their mission to call out not only that student, but the systemic racial oppression in their school and community. When I was in high school, I smoke weed and watched Spongebob Squarepants. In the 21st Century, teenage girls will save the world. 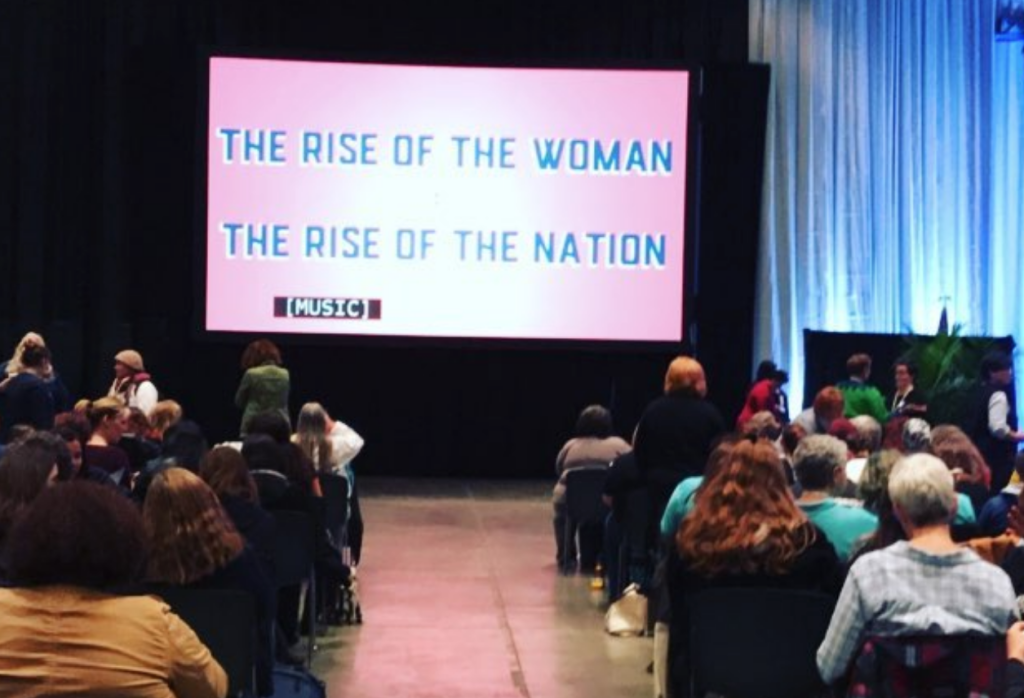 Similar to the Women’s March January 21, 2017, during the Women’s Convention, I had almost no idea what the outside world was seeing and saying about the event. I was on my phone constantly checking updates to the event app and uploading photos to Instagram, but not following any feeds. It wasn’t until a few days later that I learned the big story of the weekend was a panel called “Confronting White Womanhood.” I was there, jammed uncomfortably into a corner of a medium-sized conference room, sitting on the floor sharing Oreos with a woman from Denver and unable to see the speakers or, really, anything but a lot of feet. But I could hear and feel the stories about Emmitt Till and the history of white female victimhood and a whiff of defensiveness from the crowd but a stronger vibe of urgency. In small break-out groups spread into the hallways, we were asked to, per the panel title, confront our white womanhood. We discussed giving black women credit where credit is due, listening more than we speak, and educating ourselves. I confided in the woman with the Oreos that one time on a date with a black man, I suggested we go to my favorite bar. He didn’t want to go, said the vibe of the place made him feel uncomfortable, but I insisted and told him he was being silly. We went and sure enough were eyed-down by an old-timer at the end of the bar who then approached and asked so many awkward questions that we left with our drinks unfinished. I get it, she said, and we talked quietly in the corner about what it means to be a white woman who frequently dates men of color, what it means to actually listen to them, what it means to laugh when your friends make jokes about it, the historical context. This was 11:00 am and things I’ve never said out loud.

I needed a break. I went to what was called the Social Justice City, an area of vendors and organizations and fun things to see and buy. I ran into one of the panelists from the hyperlocal activist session and approached her with the same humble confidence that would allow me later in the weekend to shake hands with gubernatorial hopeful Abdul El-Sayed and share a strange yet poignant moment of gratitude with Rose McGowan. I asked for advice, we discussed being tired. And then I cried, and then she cried, and then she told me, “It’s no accident you’re here right now.” I’ve used that line a few times since and it doesn’t seem to help my atheists sisters but I carry it with me and it’ll make a good cross-stitch whenever I learn to cross-stitch.

A panel on TV and film featuring Amber Tamblyn and Alia Shawkat, a break during which I stepped out for meatballs and multiple cocktails with a local friend, a night time welcome presentation from Debbie Stabenow, Kristen Gillibrand and others, and then day one was done. I retreated to my brother’s place in Hamtramck where I was staying for the weekend. After 20 minutes or so of catching up and casual imbibing, I was asleep. “I didn’t expect to be so emotionally exhausted,” I told him. “I expected it,” he said, “but I KNOW you.” 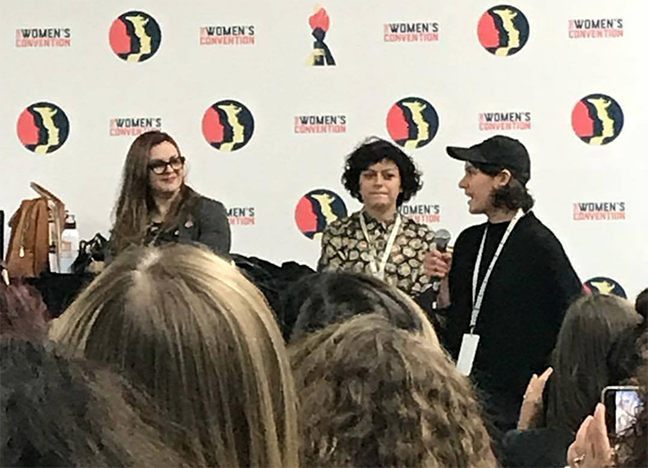 I was late and my Lyft driver almost got side-swiped and there were anti-abortion protestors lining the sidewalk outside the venue. Lifestyle hazards. Cobo security are very good at their job and were asking attendees if they were okay as we entered past the photos of dead fetuses and colorful reminders of hell as our final destination. “I’m fine but I need coffee,” I replied.

An intersectional panel to start the day, included representatives of the disabled community and trans women, factions that have been critical of the Women’s March organization and leadership. Throughout the weekend there would be panelists critical of the organization and organizers. A testament to my new favorite catch phrase “unity is not uniformity.” After that a practical session on fundraising, moderated by Linda Sarsour, one of the most dynamic speakers I’ve ever heard and most beautiful people I have ever seen in person. I fangirl over the activists as much as I do over the celebrities, though I fangirled hard over them, too, when at the next panel I saw Jackie Cruz from “Orange is the New Black” and Yandy Smith from “Love and Hip-Hop New York.” I feel I can love both, though don’t tell the trolls (mostly men) who need to frequently ask how I can know who designed the dress Megan Markle wore in her engagement photos and what bills were voted on in Congress that week. I just can. 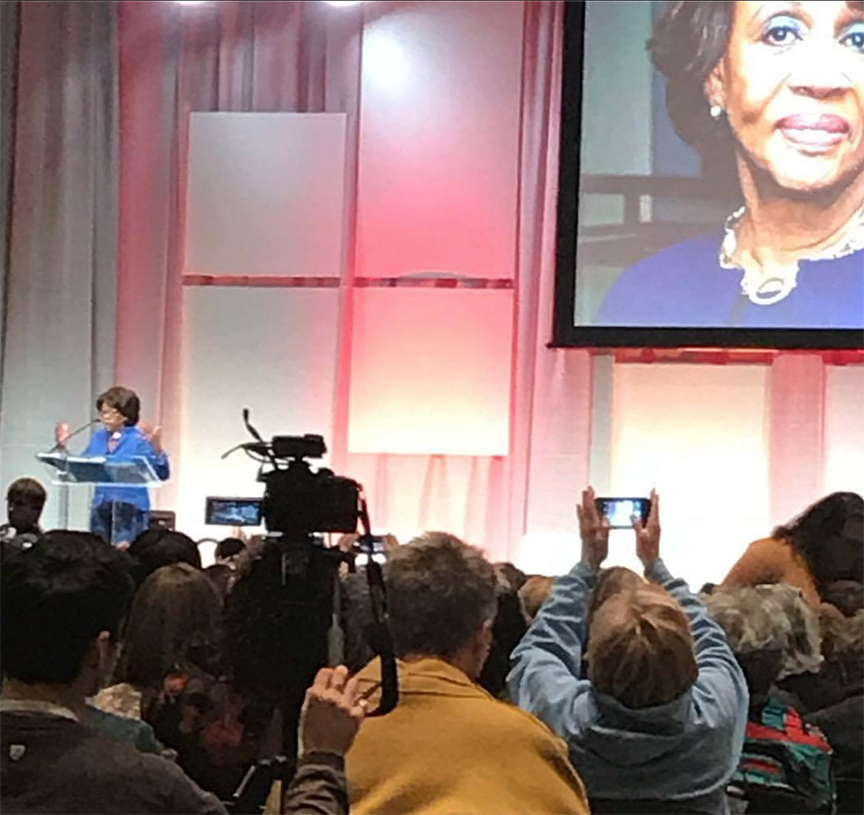 Day 2’s focal point, maybe the focal point of the whole weekend, was the luncheon honoring Maxine “Reclaiming My Time” Waters. Her lead-ins focused on the surge of women running for office and what it would take to “reclaim our time” and reclaim, or claim for the first time, politics. Ms. Waters led the crowd in a rousing chant of “impeach 45” that felt good and made excellent social media content but feels, in my gut, like a superficial goal.

I carried that feeling with me to my remaining sessions. “Say Her Name: Police Violence as a Feminist Issue” was moderated by Andrea Ritchie (whose excellent book Invisible No More: Police Violence Against Black Women and Women of Color should be required reading) and included Black Lives Matter leaders and two Detroit mother’s whose daughters were killed by police brutality. “Not All Pussies are Pink and Not All Women Have Pussies” was a scathingly honest panel of trans women critiquing the Women’s March and mainstream feminism in general, with some points that were hard to hear and realities that were painful to face. Voting more women into office doesn’t feel like an important solution when the most marginalized among us are fearful for their lives. I ended my agenda viewing a film “Bigger Than Water: Flint Water Crisis” in a room with women from Flint who lived the crisis and women from other parts of the country who’d just learned how deep the crisis and corruption really went. Oppression runs deep, I was reminded in conversation with a panelist from the Not All Pussies session later than night, it’s not new and being a fighter and ally is not a destination.

A social justice concert to wrap up the evening. BombaRica from Puerto Rico and the Resistance Revival Chorus with songs of freedom and fight. A glass of wine and some dancing. Another glass of wine. 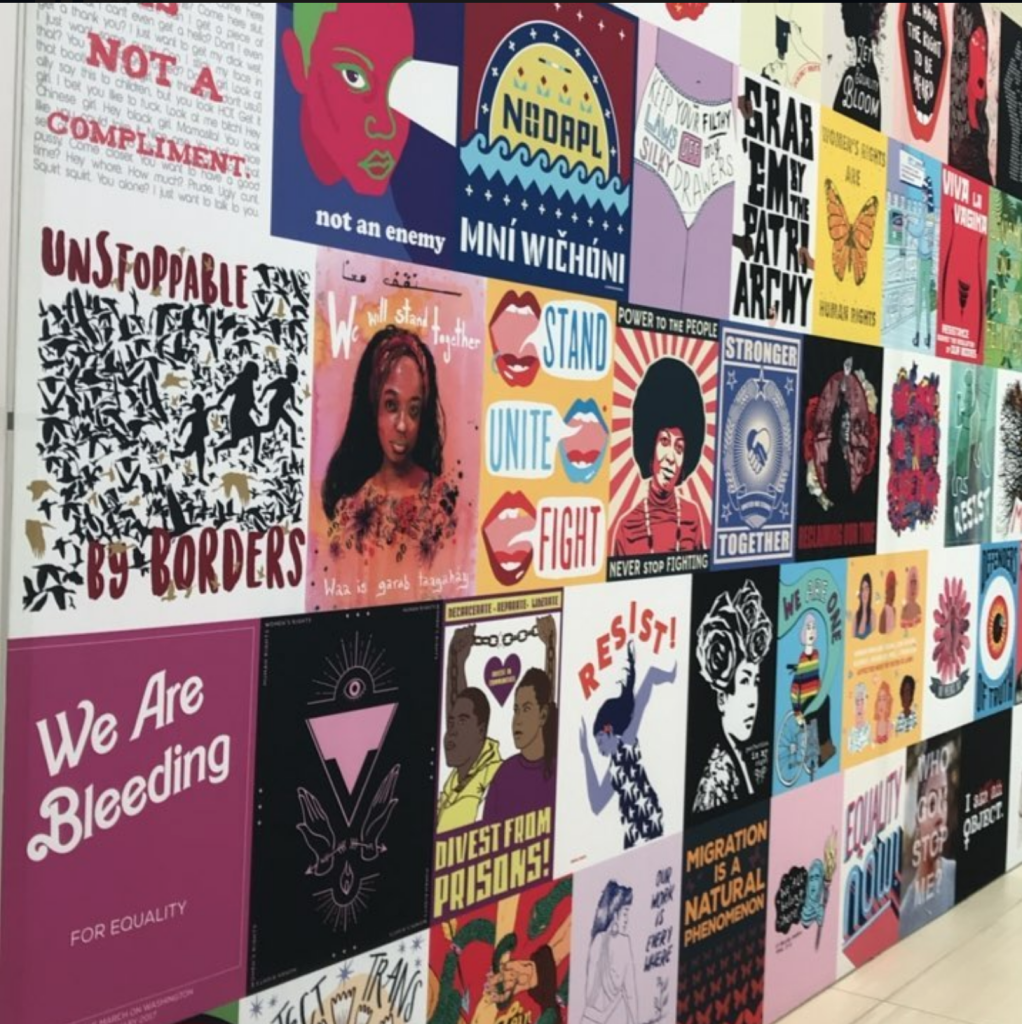 On day 3 I was tired. But a new kind of tired than I was on day 1. A productive tired, the kind of tired after you’ve stretched your brain as far as it can go and questioned yourself and laid your emotions raw and also maybe drank too much in Mexicantown. An ecumenical service in the morning felt comforting even though I’m not religious. A state caucus where I remembered I don’t fit in with my local activists and congregated instead with a queer contingency from Flint who welcomed me and gossiped about the weekend and then understood when I decided it was just too much and went for more coffee and quiet contemplation among the remains of the art display in the main hall of Cobo.

It’s lonely, in a sense, to feel so intensely connected.Lonely but also liberating. There’s no playbook for activism, no right way to do it. It’s work and learning and getting it wrong and disagreeing with the people you admire and follow and finding out what you believe and what your skills are and where your passion lies. But the connection is also a driving force, the feeling that even if your fight doesn’t look like anyone else’s, you’re not the only one fighting.  It’s not for the weak. And I question regularly if it’s for me. I commit humbly to doing my best, but is it enough? In the presence of thousands of women who do the same, it felt like it might be. 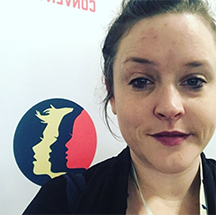 The last day was a short one, and ended with a wrap-up from the organizers, moderated by Angela Rye. I’ll admit I snuck out early to beat traffic, but “what next” echoed in my head. I drove across town to the bar where my brother was working, ordered a burger, beer, and shot of whiskey. Another bartender gave me a few bucks for the jukebox in back and I played an assortment of 90’s rap from the likes of A Tribe Called Quest and Wu-Tang Clan and crowned it with Solange’s “Cranes in the Sky,” a beautiful ode to that restless feeling of we need to do something but what. A fellow patron asked, “what was your biggest takeaway from the weekend?” and I answered, “It’s too early to tell.”