#Me?: My Career in Workplace Sexism

My great aunt Flo (1903-96) worked as a secretary in offices from high school graduation to retirement at age 65.  The last 25 years of employment were as the Executive Secretary for a Wisconsin steel company.  “He was a good man, a gentleman.  Never tried anything…not like some of those…” and she grimly set her jaw as she silently remembered certain execs and managers.

Hollywood actor Jodi Foster said every man over thirty likely has improper workplace behavior in his background.   This one now reflects on contemporary politics and celebrities, amidst past managers, colleges and universities. 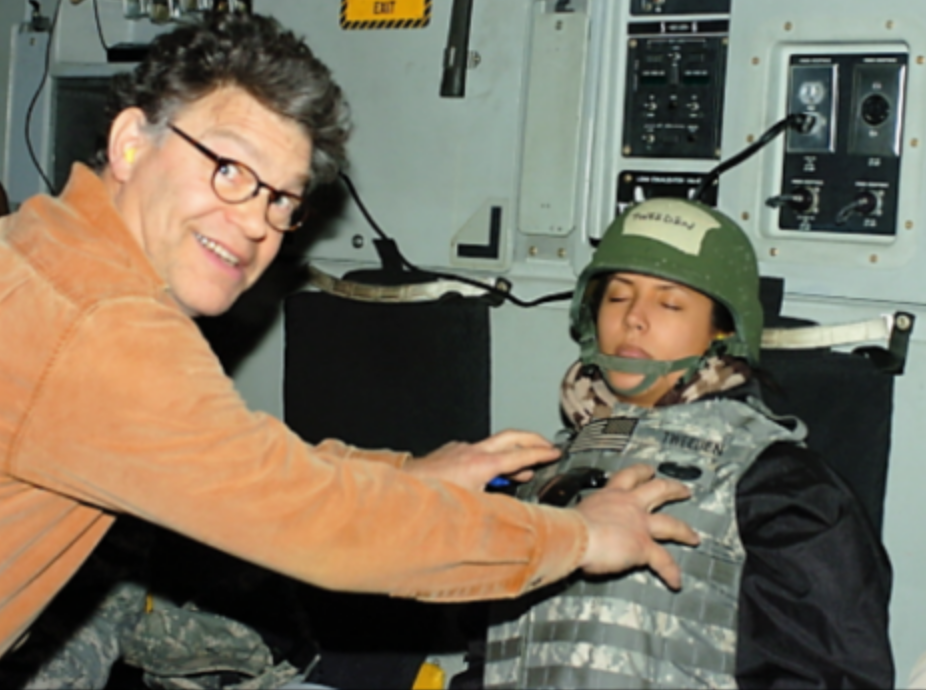 Al Franken, still a television comedian and not yet a Senator, kisses female co-stars in skits too aggressively and mimes for the camera on a USO Tour that he’s squeezing a sleeping journalist’s chest in her flak jacket (something Bob Hope might have done seventy-five years ago).  Instead of being roundly criticized and called a rude jackass, two dozen Senators (including Bernie Sanders) call on him to resign.

I surprised female friends when I sort of sneered at the young actor who dined and drank the night away with Kevin Spacey, and then was surprised that the older man made romantic advances towards him.  I can’t help but think he should have gotten too many signals of Spacey’s intent.  George Takei has met similar charges.

There are degrees of abuse, some great ones being Harvey Weinstein’s rapes and coercion, Bill Cosby’s application of date rape drugs, Roy Moore’s statutory rape of teenagers.  Any workplace agressions—as at FOX, NPR or BET—fill their own level of Hell, improper behavior tied to promotions, continued employment or the workplace culture, as does grading favor by a professor or teacher. #MeToo is about pointing out and bringing attention to coercion, imbalanced power relations.

Following those mortal sins, there are venal ones of adults behaving badly.  I would  morally lump Al Franken’s peckerdillos amidst an instance of my own.

Apple Computer thirty years ago was a decidedly progressive workplace.  The morality of selling Macintoshes to the US Army was hotly debated in-house, as well as the CEO’s salary of a million a year. Same sex partners were awarded the same benefits as any household, and there were many out gays and lesbians in the documentation and publishing departments.  Heterosexual re-couplings could be  awkward when all involved were still on payroll.

There was an Interface Graphics Director, a pay grade above mine, English woman about a decade older than me, who swore exuberantly and colorfully like a Liverpool docker.  I misinterpreted the borders of her vulgarity, and one day made a double-entendre with vaginal implications involving the color “pink”,  She was angrily horrified, and I quickly apologized.

In the 1980s new field of “computer graphics” I had several female managers.  The first was art director for a college’s training videos, the second a retired school administrator who co-owned an educational software company.  One was a one-legged lesbian who cheated some other guys who worked for her when, instead of paying them, she purchased alternative treatments for her brother’s (then fatal) AIDS.

At Apple a new manager, whom I derogatorily referred to in a letter to a friend as “mousewoman”, told me upon introduction “Oh, you’re the guy who tries too hard to please.”  One Apple manager, whose academic background was a strike against her, returned to university teaching a few years after recognizing her managerial incompetence.

When I applied for a computer art and graphics position at nearby San José State University about twenty years ago, an incensed male professor told me “you were in the top five, but it was decided they’d only interview the three women candidates.”  I felt that was OK, it made sense they’d want diversity if it were predominantly male then.  But I was used to cavalier treatment by universities, for three application portfolios of 35mm slides for different openings in Stanford’s Art Department were all discarded by them.

A few years ago all the Deans of the five colleges of my university were female.  But one got promoted to Provost, and now men helm three of the five.  One weird university museum staffer hit on several of the male Art Department faculty; she’s long gone, and we all chuckle.  Longtime friends of mine, guys now in their sixties, fondly recall initiation by adventurous high school teachers.  In the 1970s professors dated students.  And I remember an early-1970s ESQUIRE (my teenage guide to proper manhood) magazine memoir by a professor of decades of conquests called “Up the Down Co-Ed.”

In the long tradition of directors with young actresses (Rossellini & Bergman, Hong San-soo’s scandalous affair with Kim Min-hee in Korea), a Film Studies professor in 1970s Dartmouth had a student girlfriend, as did a visiting jazz musician in the Music Department.  Invited to a 1981 party at the loft of a painter teaching in the San Francisco Art Institute, I was impressed by what seemed intimacy of the women students present with their profs and Deans…but by the end of the evening, the middle-aged men were so doddering drunk that the girls served as nurses, making sure they reached home safely.

I’m horrified to read of Ivy League “slut shaming” and the “walk of shame” after a woman’s spent a night with a man, certainly a college event that always left me grateful and feeling honored.  Camille Paglia wrote that college girls who get drunk and violated at frathouses should simply shake themselves off, have a cigarette, to thank all feminists who fought for their right to take the risks they did, free of the male control and scrutiny her Italian grandmothers knew.  Brilliant as her Sexual Personae (1990) is, one can imagine cruel Camille swapping can-you-top-this carnal college stories with Betsey DeVos over their third cocktails though.

Finally, I hope I’m not a problematic dispenser of The Male Gaze, about which I show my (mostly Saudi & Chinese) grad students John Berger’s 1970 “Ways of Seeing”.  [illus: 1998 painting]  I’m an artist, attentive to things around me, including female humans.  I believe money spent on a colorful tattoo means it’s there to be looked at, or at least noticed.  Yes, I’ll notice your bosom if a rose vine is curling up from it., or the angel wings tattooed at the base of your spine as visible between a short shirt and low-slung jeans. 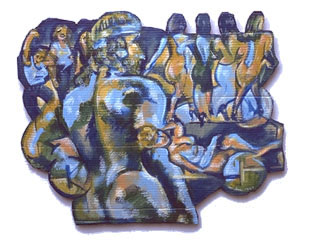 I may even comment on a student’s appearance: three months of farmer jeans suddenly replaced by a skirt, stockings and heels might elicit “You’re dressed nicely” or “Very elegant”, explaining my sparkle.  Fifteen years ago an elegant black student grinned at me in an elevator, said “Your hair looks great”, and I haven’t stopped bragging, have I?  I’ve complimented hair when braids are installed or removed.  Yet I’ve also, perhaps more often, complimented men students who’ve dressed up.

If I reflexively smile and nod in greeting to a student in the hall (You go, Goth girl!) I hope it’s not creepy, staring, but pride in being admired: “That older gentleman appreciates me.”  This Fall, two female students stopped by my office, one (who’s met my wife) to sign up for a Winter class.  Something I said, maybe about the number of guys in the class, had her laugh “We know you like women.”  I took it as a compliment in contrast to some faculty who are notably sexist, or gruffly unappreciative of some female students’ experimental and edgy art-making.

My office door open, I once heard an art student say to her vivacious friend “Mosher likes you”  That woman, graduated and married, has found success selling makeup online, able to stay at home with her baby.  Maybe it’s a generational thing, but I feel queasy watching her makeup tutorials spring up on my Facebook, for back in the day I’d only seen makeup being put on by a lady after I’d spent the night;  Flaubert novels be damned, as a married man, to share the intimacy of her boudoir mirror just doesn’t seem proper; Shh! I hear your husband!   Yet, having been friended on Facebook by women students or recent graduates—Voltaire said he always learned the most in conversations with women—I’m privy to all sorts of Girl Talk about dating and sex.  I usually keep my avuncular insights to myself.

One Asian student grad student in her thirties told me an older Business professor’s invitations to dinner made her uncomfortable.   Shortly before graduation day (all grades submitted) she came into my office, said “I’d like to express gratitude the way we do in our culture”, then knelt with her forehead on the floor in kowtow to me.  This honor was also a humbling experience, making me realize my position (and reputation) was not one to abuse.

In her piece on #MeToo titled “Kicks Against the Pricks”,  in the December 21, 2017 New York Review of Books, Laura Kipnis cited Dorothy Dinnerstein’s 1977 book The Mermaid and the Minotaur.  Psychologist Dinnerstein roots men’s historic subjection and degradation of women in the boychild’s experience of control by the great female Mom.  Somehow this 1970s feminist contribution (a strong seller then when I worked in a bookstore)  has disappeared from public consciousness and discourse.

Aunt Flo wore into her nineties  a couple of Jackie Kennedy-like suits (classic Chanel knockoffs) in shocking pink, but probably never saw college students in revealing tights emblazoned PINK over butt or crotch (nor pink Pussy Hats on the march, nor Russian freedom fighters Pussy Riot).  In her day Republicans were  staid, dour, maybe enthusiastically patriotic like Ronald Reagan, but well-behaved towards women in public.  Democrats too. 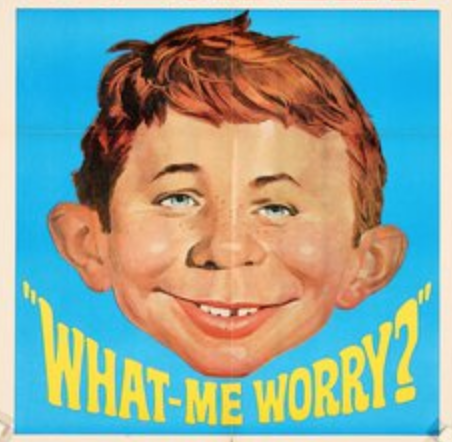 So in my world, my career, my personal interactions with women I need to be vigilantly aware (woke!), to check my privilege.  I’m not sure what immediate change in behavior this might take, but my heightened concern after #MeToo has prompted my recent questions on the topic to female friends,which  seems to be one step.  If I proclaimed “I’m not sexist” it would be like crowing “I’m not racist”, for I grew up in, and spent many years in, a society that variously promoted both vices.  Men should read and listen to women’s experiences, think before posting and get feedback (Communication! What a concept!) before publishing, and apologize where necessary.

Even Bernie Sanders insufficiently made women and people of color feel they were being heard.  Like the blissfully ignorant mascot of MAD magazine, I guess too many of us guys figure #WhatMeWorry?.

Painting “The Male Gaze” © Mike Mosher 1998, 2018.  Thanks to Christi Griffis, Chrysanthe Mosher and Tamara Watkins for comments on this essay.