“…One time I played “Purple Haze” by Jimi Hendrix and followed it with “Catch A Falling Star” by Perry Como. And this guy came up to me and looked at me and said, “You’re sick!” — DJ LEBOWITZ

I’ve been interested in music for a long time, even before I realized what an essential part of pop culture I was getting roped into. I loved the songs, but I also loved the mythology and the background stories creating heroes and villains and an ongoing narrative about the triumph of creativity over commodity. Pretty naive, right? But somehow it all got me through my torrid teenage years and the harsh realities of being a geeky social pariah. I was convinced that somehow rock stars and rock journalists were really my friends from afar and that someday I would be in their ranks.

If I had somehow crossed paths with rock’n’roll Solo Pianist DJ LEBOWITZ during those awkward years, I’m sure I would have had my world turned completely upside down. To hear someone who could deftly transition between a lightning fast DAMNED song to the AM radio pap of BILLY JOEL to the gutsy country-blues of JOHNNY CASH all on a single eclectic solo piano medley would have made me question all my young purity-conscious views about music and pop culture. In a good way, of course. 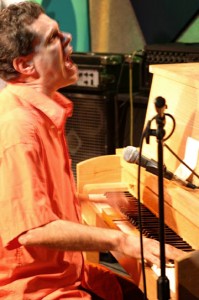 Hearing him play today may not have the preconception-shattering effect that it might have had in my youth, but it still bristles with the thrill of the genre-breaking and the unfamiliar. Hearing a seamless medley that bounds from “Safety Dance” by MEN WITHOUT HATS to hit songs by the likes of BON JOVI and TRAIN, to unfamiliar delights by TRANSLATOR and a number of barely-known punk bands is like hearing 40 years of pop music history thrown into a blender without a lid and having it spray into your ears with a randomness that makes perfect sense.

A DJ LEBOWITZ performance is the perfect antidote to a pop music culture that seems to be interested only in cynically preying on the bones of the bands and songs that came before and repackaging them to an audience unfamiliar with the originals. It’s a breath of fresh air in a world where success is determined by choosing the right genre at the right time rather than breaking ranks and attempting to create something quintessentially new and different, where “making it” in the music business is measured by the number of sync rights sold for your songs to ad agencies or movie producers.

“I have tried to be as eclectic as I possibly can with my professional life, and so far it’s been pretty fun.” — ROLAND BARTHES

“When I first set out to be a professional piano player — professional meaning you’re making money at it — what I had in mind is I was gonna be playing rock’n’roll. I wasn’t going to be playing “Misty” or GERSHWIN or PORTER or any of the standard stuff that piano players usually play. I was going to rock out!” — DJ LEBOWITZ 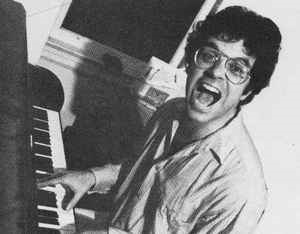 A recent informal discussion I had with DJ at his favorite vegetarian Asian restaurant (after a low-key but warmly-received matinée performance in the Marina District) yielded some surprising insight into the hard times his dream of breaking the “rules” of solo piano performance brought him. His early years in Georgia and Florida taught him that to survive he would have to be flexible and have some standard fare at his disposal to provide to the audiences demanding it. But when he suspected there might be some interest in some of his more eyebrow-raising fare, he would grab the opportunity to throw some DEAD KENNEDYS or BLACK FLAG or RAMONES into the mix.

Once DJ moved to San Francisco in the early 1980s he found a compatriot in the controversial “Pope Of Punk” at the time, the late punk venue promoter Dirk Dirksen. DJ sees DIrksen’s work at the infamous early San Francisco punk palaces Mabuhay Gardens and On Broadway as art projects of sorts, but he lauds Dirksen as an straight-shooting businessman who always provided the gigs he promised. In contrast, DJ recounted several examples of regular engagements that disappeared for him often without explanation or apology. It was only the power and persistence of his vision, along with the help of some very supportive friends and bands, that made survival possible at many points in his decades-long career. 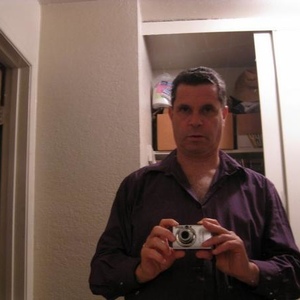 One time a genre-bending act of subversion worked beautifully to get him a regular gig at a once-thriving weekend punk rock event. After toning his act down on a regular basis at a restaurant engagement that was paying some bills for him, he noticed one night that some punk rockers had slipped into the room, so he slipped into a lounge-music version of BLACK FLAG’s classic “TV Party” just to see the reaction. And DJ got that reaction in spades when one of the punks came up and asked him the name of the song he just played. The punker was happy to be confirmed of his own suspicion, and offered a weekly venue for DJ’s more adventurous piano workouts.

As time has rolled on, the jobs have become more plentiful, and the idea of solo rock’n’roll piano has become less shocking. These days DJ is able to find paying gigs most days of the week, as well as the occasional wedding, generally incorporating his incredibly vast and eclectic list of memorized songs into his performances. At the aforementioned performance I recently witnessed, DJ dealt with the obligatory requests for “Piano Man” and jazz standards with magnanimity and humility, but then was able to turn interested audience members onto lost should-have-been-classics from bands long-forgotten except by him and a few motley record collectors. The welcoming response to these unfamiliar melodies was a genuine surprise to me, and clued me into the quiet genius of DJ’s approach to varied audiences. He’s a master at reading a room, to be sure.

“I really like the pop culture materials of everyday life, but used in some way that elevates them to something you notice and care about.” — GREG LYNN

“I like to make art and cut a fart!” — DJ LEBOWITZ 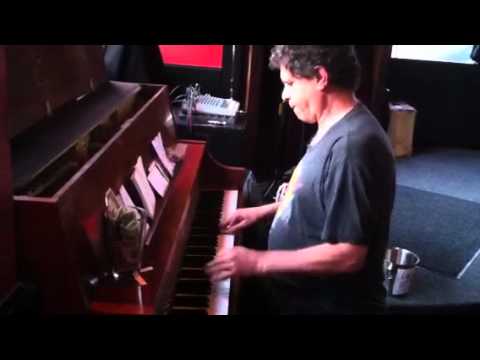 In the late 1980s DJ ventured to Chicago, where I was born and raised, and played several shows that I was fortunate enough to hear about and attend. A group of underground and punk music fans gathered and thrilled to the unusual sound of a pianist taking on the speed and power of hardcore punk classics and humorously dissonant originals with a ferocity and precision that we had never seen before. It left an impact on us all, and DJ became a fast fixture of the “scene”, even appearing in an ill-fated vampire punk video organized by local luminary BEN WEASEL. I never got a copy myself of DJ’s long out-of-print solo LP “Beware Of The Piano”, but many friends wore their copies out listening to goofball classics like “Lousy Personality” and “The Barking Song” (which DJ continues to play on request).

His name and his work stayed in my mind through the 1990s, when I found myself in San Francisco walking down 4th St and suddenly saw a posted flyer that had his name on it. It advertised an appearance at a bar in Pacific Heights and I was determined to show up to see what DJ was up to over the half-decade since I’d last seen him. At the show, I introduced myself and DJ and I shared some memories and then he played a bunch of SCREECHING WEASEL songs for my benefit. But the moment that really stuck with me came when a very earnest audience member requested a RICHARD MARX song. Not only did DJ pull the cover out of his incredible musical memory and play it convincingly, but he encouraged the requester to sing along. 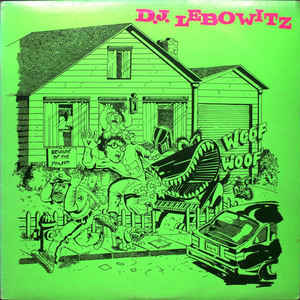 Witnessing this surprisingly emotion-filled spontaneous collaboration encapsulated for me what is so amazing and so subtly subversive about DJs musical vision: he is willing to take pop culture and underground culture and blur the distinction and the separation that corporations (and often critics and fans) work so hard to sustain. “High Art” and “Low Art” are just pieces of the same puzzle in DJ’s capable hands, and this breakdown of barriers is what makes his performances so memorable and refreshing.

(DJ adds, “For the record, I do NOT like to cut a fart. I guess I just couldn’t resist saying it because it rhymes!” He adds, “The venues I currently work at are Reed & Greenough, the Madrone Art Bar, 83 First St., and Sept. 1 at Mr. Tipple’s. Please check my website http://home.earthlink.net/~djlebo/id3.html or my hotline at 510-595-5589 for details and updates.)