Put your finger in, on, Jim Shaw’s hole; the whole finger. At his 2015 Mass MOCA exhibition “Entertaining Doubts”, over a hundred of his artworks spanned twenty thousand square feet of the massive North Adams, Massachusetts Museum of Contemporary Art complex. Yet his two cinematic works exhibited there, “The Hole” and “The Whole” felt like a couple of the least successful parts of his grand show.

There is the problem of time-based media shown in a museum or gallery setting, where the user’s control over attention allotted to each exhibit is halted, by having to sit still and focused for the artists’ duration (or by leaving you know you’ve only seen a fragment).  The former factory was well suited to the hanging of huge painted pieces like “Mississippi River Mural” or architecturally scaled tableaux like “The Miracle of Compound Interest” and “Not Since Superman Died”. 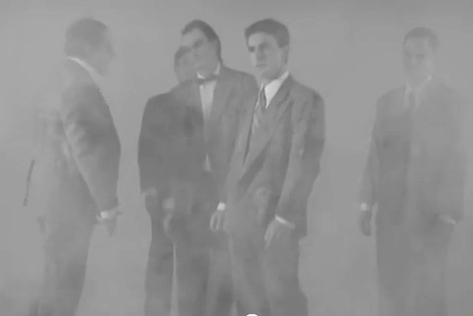 Still from “The Hole.”

When Jim Shaw (1952—) was a teenager and a college student, everybody was making Super 8mm movies.  His Ann Arbor friend Cary Loren made films featuring his girlfriend Niagara, their Destroy All Monsters collaborators Shaw and Mike Kelley, and locals Link Yaco, Paul Remley and Ingrid Good. Jimm Juback, who introduced me to University of Michigan art majors Shaw and Kelley in 1975, made several short projects from about 5 to 45 minutes long, and loaned me his own Super 8mm camera for my own projects in high school. Juback tells me we went over to the house undergraduates Shaw and Kelley shared (which sported a sign GOD’S OASIS on the front porch) claiming we were making a movie, using a camera mounted Sun Gun lamp to melt plastic army men into their kitchen vinyl floor; I don’t remember the event, but it sounds like a typical arty brat weekend of the times.  Their UM College of Art and Design classmate Gerry Fialka helped organize an Ann Arbor 8mm Festival to showcase this low-end underground cinematic energy.

In the 1998 interview “Here Comes Everybody: A Conversation Between Jim Shaw and Mike Kelley ” for the catalog of Shaw’s Geneva, Switzerland retrospective, Shaw tells how his Master of Fine Arts graduate show at the California Institute for the Arts (Valencia, CA) had been inspired by “things likes ‘Close Encounters of the Third Kind’ and disaster films” and carried a story line pitting “evil Martian monotheists against positive Venusian polytheists”, with “aesthetics derived from Awake, the magazine of the Jehovah’s Witnesses”, constructed UFO photographs and spaceship video.  He also cites, as inspiration for some drawings, Bruce Conner’s “Crossroads” (1976), of a Bikini Island H-bomb explosion expanded in slow motion over a Terry Riley soundtrack, which he found “very, very beautiful”.

Shaw’s two homonymous works “The Hole” and “The Whole” seem to consciously evoke much underground cinema of this era, if only in their aimlessness.

That special effects enhance his works is biographically logical.  In the “Here Comes Everybody” dialogue, Shaw recounts his work in the Los Angeles movie industry, on Sylvania light-bulb commercial “Mr. Light”, and how research and development at Robert Abel’s digital effects company was  supported by $100K contract from Martin-Marietta film to influence Congress on the Star Wars missile defense project.  “When I first began working on high-end TV commercial effects, I guess I thought I could do some art in this context…something with subliminals in TV commercials.”  A director on a commercial for TRW Space & Electronics Group, Redondo Beach CA put a subversive message in hieroglyphics “because they were rebelling…felt like all his hippie idealism was going down the drain.”  Shaw then worked on special effects for “A Nightmare on Elm Street 4: The Dream Master” (directed by Renny Harlin, 1988), “The Abyss” (dir. James Cameron, 1989) and “Earth Girls Are Easy” (dir. Julien Temple, 1989).

“The Hole” (2007, 7:19) is in black and white, and features zombie businessmen shuffling and stumbling through fog.  In a MOCAtv interview directed and edited by Peter Kirby that precedes the movie’s YouTube presence, Shaw credits the 1962 movie “Carnival of Souls”, where a woman survives a car crash to encounter a mysterious carnival.  He also credits a 1961 Canadian movie, “The Mask” where a psychiatrist puts on a mask that produces dreams in the wearer.  Dreams are a major motif in Jim Shaw’s work, and his illustrated book Dreams (Smart Art Press, 1995) methodically illustrates several years of his very ornate ones.  Shaw speaks admiringly of how “In the ‘60s, before ‘the Exorcist’, makeup consisted of some kind of crap mixed with latex on your face, like oatmeal.”

“The Hole” is supposedly illustrative of tenets of Shaw’s made up (and purposely vague) religion O-ism, and thus follows “O-ist film rules; I have yet to make up those rules.”  Curator Denise Markonish’s notes on the show explains Oism as supposedly founded by Annie O’ Wooten in the 1840s, honoring a virgin who gave birth to herself and brought writing and agriculture to matriarchal human society until toppled by egotistical male “I” forces. 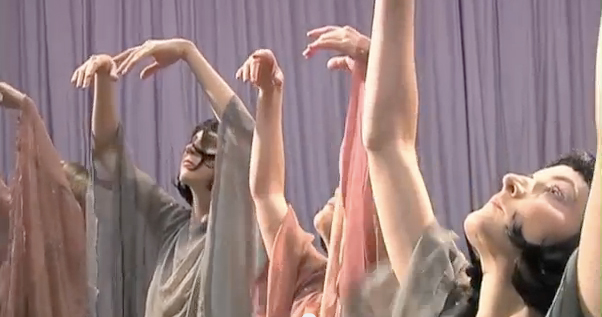 Still from “The Whole.”

Shaw has always been intrigued by strident religious tracts: Watchtower Society Apocalyptics with its multi-headed Great Beast, the Whore of Babylon, even Rosicrucian repurposing of ancient Egyptian motifs.  His hometown of Midland, Michigan appears on first glance to be blessed with staid and temperate mainstream churches—Episcopal, Catholic, Unitarian—but currently has a Republican State Representative who made his name through opposition to gay-friendly civil rights laws in his county, and neighboring Bay County.  I first heard Gary Glenn’s name in the Family Research Council head’s irritating “red alert” robo-calls when a rights ordinance was coming before the Bay County Commission in 2013, essentially the kickoff to his campaign.  So there is a dark and fervent strain crouching behind the outwardly placid reverence and tolerance.  A great beast slouching towards…somewhere…

A few summers ago, Saginaw-area writer Christi Giffis planned to make a zombie film, but laments that “we only got together and drank away the afternoon”.  Shaw, however, got his made.  Shaw says he shot “The Hole” using “Dutch angles”, this way and that, shot from overhead, using close ups, and with hand held camera.  At one point the camera is tipped on a side.  Whoa-oh-oh, trippy!

The sound track is eighth notes on violin, electronic bleeps and modulations.  A man’s forehead becomes a hole, through which we glimpse his blurry brain, or hair, or multiple exposure, for several abstract minutes.  Shaw admits it was “inspired by the radiator in ‘Eraserhead’, though I wasn’t thinking of that consciously.”  “The Hole” is as much an Ann Arbor Film Festival experimental film from Shaw’s college days in the first half of 1970s (one was called “The Shlamozzle” but I don’t remember details) as it is low-budget horror movie one might have found on a triple-feature at a drive in the same era.  At the end of his interview with Peter Kirby, Jim Shaw says, in mannered voice like a Detroit TV movie host, “Set aside a few minutes to enjoy ‘The Hole”.

Around 2005 (a couple years before “The Hole”), Shaw’s friend Mike Kelley wrote, produced and video recorded a series of theatrical vignettes “Day Is Done”, with the support of his art dealer Larry Gagosian.  Kelley’s project somewhat resembles a rock opera, that white musical trope of the late 1960s and early 1970s to re-conquer the radio and turntable from African American mastery of the three-minute pop (or eleven-minute disco) song.  in the third, fourth and six of its moments of Kelley’s multi-part “Extra-Curricular Activity Projective Reconstruction”, there are vampire motifs.  The vampire is a boss, exploiting his workers, an effeminate narcissist.

The second of Jim Shaw’s movies, “The Whole” (2009, 8:40) is unabashedly feminine, for it offers up sylvan female counterparts to the male zombies, this time shot in color, of his early black and white “The Hole”.

Every shot from “The Hole” is reconstructed, but edited in reverse order.  Shaw calls it a “cultic exercise…but within this Busby Berkeley framework.”  The movie, whose full title is “The Whole: A Study in Integrated Oist Movement”, has choreography by Anita Pace.  In the O-ist opera video, dancers are organized in four elements.  Dancing women with “God’s Hair”.   It appeared at MassMOCA not far from “Oist Opera Video Dance/Four Elements”, as well as wigs, a female set, and “Hollywood Wigs” like fetus or octopus.  He also created a Lois Lane helmet in urethane, in an edition of 20.

Shaw decided the breathy New Age soundtrack, which sounds like exotica music, “had to be a lot more compelling”, and while it supports the action onscreen, it doesn’t stand out in memory.  This video, abstract reflections and refracted of light of an Ann Arbor Film Festival offering. Yet much of “The Whole” gives us a sense we are watching a competent studio production of a public access TV station  (or the educational offerings of “UM Presents”, produced by the University of Michigan Television studio—whose technical director Fred Remley was the father of an actor in Cary Loren films—which undergraduate Shaw might have caught on a Sunday afternoon), and are charmed (or put off) by the circa 1970 hairstyles of the wigs.

Painter Francesca Palazzola, a model for some of Cary Loren’s dramatic photo sessions of the Destroy All Monsters era (and daughter of the UM College of Art and Design’s Dean when Shaw and Kelley attended), has told of how Ann Arbor arts impresario Gertrude Prokasch Kurath organized local children into “nature dances” during the 1960s.  Shaw’s O-ist dancers in “The Whole” follow a similar Isadora Duncan-esque quest for truth, freedom, beauty and spiritual awakening.  There are teasing glimpses of female flesh beneath the diaphanous gowns.

Kelley had pagan ritual motifs in “Day Is Done” too. “Poem of the Consort of KISS” has a fake medievalism associated with 1970s heavy metal bands like Led Zeppelin (and lampooned in “This Is Spinal Tap”), recitative Ossian over ecclesiastical harpsichord to deliver a Tolkein-esque heavy metal sword-and-sorcery metaphor for the clitoris.  Catholic schoolgirls populate a pageant where one is chosen to represent the Virgin Mary and receive advice from a matron.  There is a farm girl’s song “Plants”, containing both Lady Bird Johnson and Arbor Day mentions.  Listening to it on audio CD, the plants’ voices call to mind the poems of flower-clutching Henry Gibson on the 1960s TV show “Laugh-In”.

In their 1998 published dialogue, Kelley opined to his friend that Shaw’s show at EZTV, made from “leftovers” of his digital effects work in the movie industry “signaled the end of your romance with popular culture.”  The major special effect in his cinematic project a decade later, “The Whole”, is a physical, kinetic one, not a digital effect.  Speaking as the movie’s producer, Shaw confesses to interrogator Kirby how he “decided I needed spinning banyan tree, which doubled the cost of everything.”

Much as this reviewer is often more forgiving, liberally open-minded and less impatient watching a movie in the living room than in a public movie theater, I liked “The Whole” considerably better watching it on YouTube than in MassMOCA.  The tiny screen of the desktop, tablet or phone, so within our grasp and under our control, offers a different viewing experience than the lonely cinema component of a gallery or museum show.  There the screen suffers in comparison to Shaw’s artworks, or bodies of them, around them.  Are they over-determined moments or milestones, in an environment supposedly more open-ended in its panoply of meanings?  The screen compresses, contains experience, whereas a physical museum environment—a repurposed factory full of artworks—endeavors to expand it.  Yet a savvy artist, at the height of his powers, like Jim Shaw, given the opportunity, sends his viewers in both directions: squeezing into the hole, and dancing through and among the whole.

This work has been supported by a 2015 Special Collections Research Travel Grant, Saginaw Valley State University.