With her strong local influences in Portland and an emphasis on locale and the personal, Vanessa Renwick is one of the most original artists working in film today.

Intro: Last June, we traveled to speak with Vanessa Renwick about her inspiring, thirty-year volume of work. Her home and studio space are part of an early settlement of artists (a locus for several of her films) that has been in her neighborhood for years. Deeply cared for, the house is full things to look at including a wildly-eclectic collection of vintage maps and posters; oil paintings, tapestries, animal bones, furs, and wooden objects which grace each room and the garden. A central sculptural piece – an industrial-strength steel ladder designed by Renwick – leads up to her own, very private, attic space. Off the kitchen is a small studio with an iMac, books and a large window. We walked out to the garden for tea and to record, followed by Fox, an unusually pretty white dog she got from a rescue shelter. 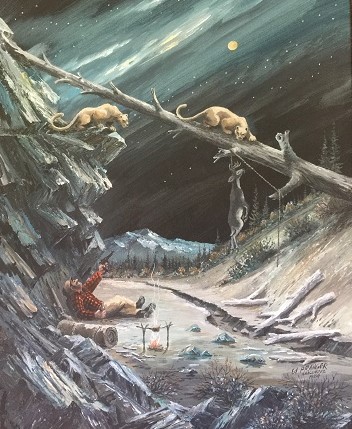 On my way to the back of the house, I notice a very scenic-looking painting. It depicts a sole male camper at a campfire. In this single depiction, I consider, is a whole movie scene of threat, of danger, of being at peace with the cosmic forces of death, of life. The full moon illuminates the scene behind passing clouds. The man has shot and killed a deer which hangs before him, fresh-kill, on a dead tree branch. Two deadly, hungry, lurking cougars have found the deer and are eyeing it. The armed man beneath has not yet been spotted by the cats who are crouching about, approaching the deer. But he has noticed them. He reclines, waiting with his revolver ready. If death comes, he is “good with it.” If not, he will have been prepared. He is smiling.

Background: Renwick’s art often takes on the form of a filmed tableau the central drama of which is born from a collision with fate in the predicament and environment one is found in. Rather like the painting, each work is a diorama-like episode. They spell things out. Nature and culture are conflicting, demystified and these works don’t often bode well. Or they pose a giant question: “Is this really the way things are?” The Yodeling Lesson, for instance, uses a reverse tracking shot as a woman bikes naked downhill somewhere under a freeway. This psychogeographic film gesture is a kind of call to action through prank and disbelief.

Stallions in Revenge uses archival footage. Wildly bucking horses are shown frantic in their motions. Anthropocene destruction underlies Mighty Tacoma as industrial logging facilities are ruminated upon in long focus. Portrait #1: Cascade Terminal is a similar meditation on freight trains. Shots hover above the various geometric angles of a box girder bridge, a grain storage silo, the river, and passing trains. It is hand-processed and stretch printed in16mm with sampled loops and an ambient droning soundtrack. In Richart, she documents the yard artist whose never-ending sculptural forms took 20 years of non-stop effort. Richart is a love letter to vernacular art and the environments of shelter and immersion which artists create. In 2006 she made a 35mm film Portrait #2: Trojan featuring slow-motion demolition/implosion of the Trojan Nuclear Power Plant outside Portland. This strong image somehow symbolizes the collapse of the modern world and the failure of democracy. Amidst trees and birds, such emphasis brought me back to the camper’s fateful moment in the painting.

New work: NEXT LEVEL FUCKED UP (featured on OtherZine #31 front page and in Artists’ Projects) offers up all of these themes: chaos, art, loss, destruction, culture and its mediated discourse. A pyramid of small video monitors displays the different, but related topics. It’s Renwick’s “shit show” as an art spectacle. A glowing, blood-red light bathes the gallery wall, where the title NEXT LEVEL FUCKED UP is emblazoned as a banner flying high up in the sky. On soundtracks, we hear about public artworks being erased, about animals locked in cages, habitat loss and gentrification. The whole piece generates a kind of horror-film glow and audio presence; a school dance holiday dread. Poop bags left on sidewalks are the “pattern” on Renwick’s bean bag seating design. We are invited to watch and to think.

The interview: Vanessa Renwick, gifted, naturally-talented filmmaker, has persistently examined themes of nature and culture; the landscape, the body, and, as she puts it, ‘the moment between life and death’. I interviewed this impressive artist and director of her own production company, the Oregon Department of Kickass about the current political climate in the US, which she calls a ‘shit show’ and we talked at length about the nature/culture gulf between animals and humans, the effects of digital media on her practice (after using photo-chemical processes) and about expectations among young media artists in the 1990s as compared to today.

The interview took place in June 2016, Portland, OR while on a road trip to Vancouver with my family.