Life After Wartime: Weaving History and Mystery Across Space and Time 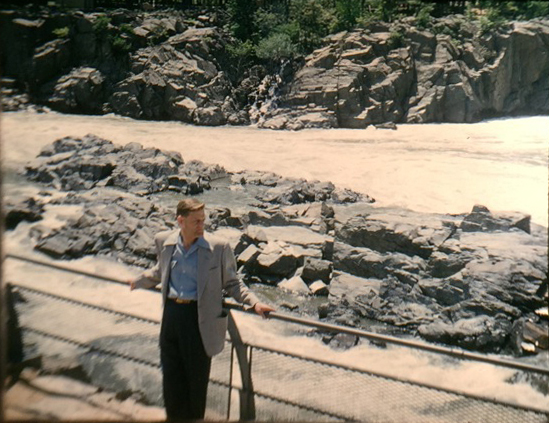 I am a visual artist who is especially interested in collage animation, a form that breathes life into material borrowed from various sources. I love diving into libraries and archives, finding interesting material and bringing it into a contemporary spotlight. When, in the summer of 2015, I was invited to show at Other Cinema a set of stereoscopic slides of my family that I had recently inherited from my mother, I approached it with the same mind set as when I approach a new animation. Here I had a bunch of images captured over a half a century ago and I had to figure out how to breathe life into them, to make them relevant to a contemporary audience. I was inspired by the recent work of Sam Green who for the past 6+ years has been presenting “live documentaries” about subjects ranging from Louis Armstrong to the San Francisco fog that are presented using scripted narration, audience interaction, anecdotal accounts and live music. Sam’s work takes subjects from history and pop culture and makes them personal. My slide show does the opposite by taking a personal subject and weaving it into a greater historical narrative. Sam and I as narrators of these live documentaries act as a sort of medium to bring subjects to life by putting them in the same room as the audience with our words; with our presence, and with our personal relationship to the material. 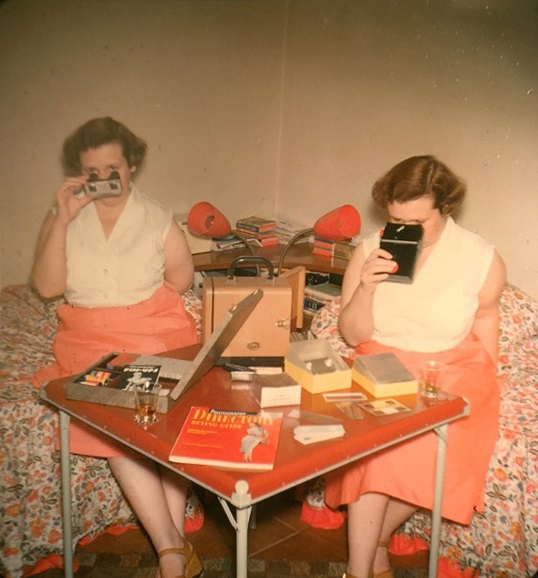 The slide collection, as I inherited it, includes over 300 stereo images, all captured between 1952 and 1962 by my Great Uncle Harold (Hal) Morehouse (although some of them were taken by his wife, my Great Aunt Francis). The subjects are fairly mundane, mostly of family members posing or caught in the act of doing everyday things. There are also some images of houses, both interior and exterior, some monuments and landmarks around Washington, DC, a whole bunch of my Aunt Nancy’s bachelorette party and also of my parent’s engagement party and wedding. What makes this collection interesting is the intersection of time, place, subject and media: three dimensional photographs of domestic life in and around the suburbs of Washington DC taken by and focused on employees of the National Security Agency at the height of the Cold War. My first task was to go through the collection and pick out the best images using my trained artist’s eye—images that could stand on their own under critical scrutiny. This ended up being about 70 slides. I then took this subset and began to compose a loose narrative around them, adding and subtracting slides as needed to create a cohesive whole. The initial seeds stemmed from a few basic facts about my Great Uncle Hal: that he was a photographer, a jazz musician and a cryptanalyst who worked for the National Security Agency, both during and after WWII. The rest came from the imagery in the slides themselves. The final shape centered on 29 images augmented by a narrative that dove in to and out of history, picking up a thread here, putting down a thread there, weaving birds-eye views of history and culture with close-ups of characters, locations and personal stories. I touched on topics including the history of the Stereo-Realist camera, the development of suburbia, a brief history of the Naval Ordnance Lab, the rise of consumer culture, cryptanalysis and the NSA during WWII, the roots of Western interest in Japanese culture and stories about my own family to help tie it all together. 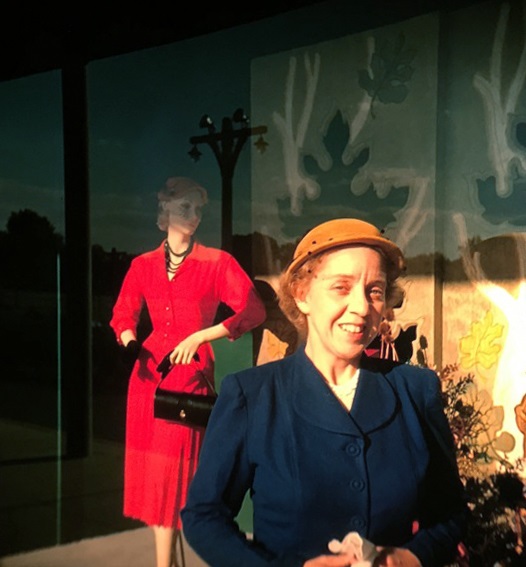 To create a compelling and truthful narrative, it was necessary to do a fair amount of research, which is one of the most fun things about working on projects for me. In some cases, things I learned about created interesting twists in the narrative, like the fact that L. Frank Baum, author of “The Wizard of Oz” book series, had such an essential role in the development of consumer culture through his work as a window display artist and advocate. I was in luck to find that I had visual material available to show while sharing this particular bit of interesting information. In this case, it was two of the most visually compelling slides in the collection that showed my grandmother sitting on a bench and then standing in front of a department store window—the mannequin in the window wearing a bright red dress and yellow hat and my grandmother, smiling into the long rays of the afternoon sun of October 1952 also wearing a yellow hat and a similar dress in royal blue, clutching her gloves and purse. In some cases, I let the visual material and the narrative follow divergent paths—like the section that showed some family members posing near landmarks around Washington DC while I talked about Harold Lloyd’s racy collection of stereo photographs. This was partly out of necessity but partly to add a little extra dimension to the material. It was amusing to me to have the audience thinking about nude Hollywood actresses and models while looking at photos of my great aunts standing in front of Monticello and other otherwise tepid family photos. 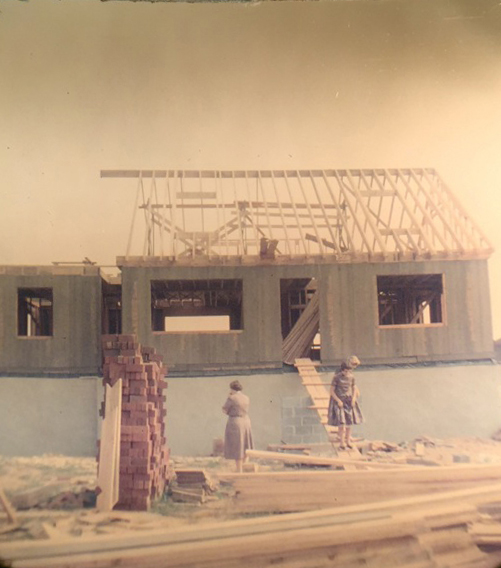 I relied on my grandmother’s memoirs for the majority of the information I had about my family. This was fact checked and embellished by information I got from my mom in subsequent interviews. In the cases where she wasn’t able to fill in missing information, I did my own research. In one case, my grandmother said only that my Great Uncle was “an officer in the internationally active Stereo-Realist Photography” which was clearly not a complete name of anything. So I searched around online to see if I could find a group that might fit the bill. I got in touch with an officer of the Photographic Society of America, an organization that was around when my Great Uncle was active, who put me in touch with the Potomac Society of Stereo Photographers, a local branch of the PSA in suburban Maryland devoted to stereo photography. When I asked them if they knew anything about my Great Uncle Hal, I learned that he was not only a member of their group, but also the namesake of an annual award that they’ve been giving since 1978. Wow! I wasn’t expecting that at all and I wouldn’t have learned about it if I hadn’t done my own research. 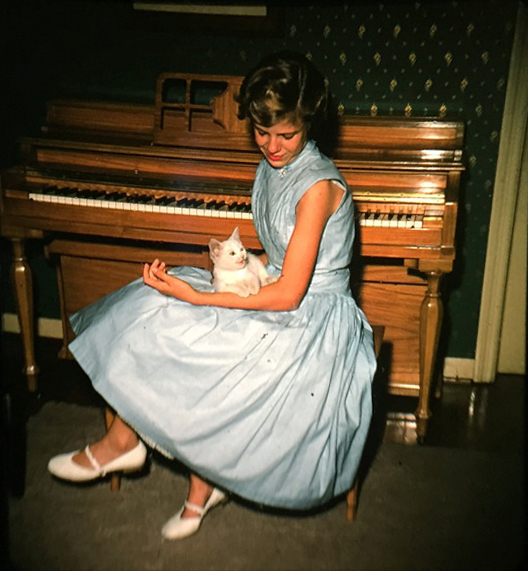 My grandmother left behind a pretty good description of what she did while working at the NSA, but not so much about what my grandfather, Great Uncle and Great Aunt did. So, to find out more, I did some searching on the NSA’s website and found a huge trove of material in the now-declassified documents from the archives of William Frederick Friedman, chief cryptanalyst of the NSA during the time when my family worked there. The search function on the NSA website is pretty rudimentary, so it took a lot of patience to look through this archive (that includes absolutely every document that ever crossed Friedman’s desk including all memos, phone messages and personal notes). Needless to say, there was a lot of digging, reading and dead ends. Miraculously though, I managed to find several documents—speeches written by Friedman—that listed my grandfather as one of those who worked on the PURPLE cipher project, the biggest project under Friedman’s direction, that ultimately allowed the U.S. to decode Japanese messages and bring an end to the war. This information was pretty mind-blowing for me to discover while searching online on my own little laptop computer in my pajamas during the spare morning hours I had to devote to it before my daughter woke up and it was totally news to my mother when I shared it with her. It’s unclear if my grandmother ever knew about this herself since she never discussed it and it was not mentioned at all in her memoirs. This, and other assorted bits of information cross-referenced with things she told me while she was still alive, led me to wonder whether my grandparents were sworn to secrecy about discussing what they did during the day even within their own household or whether, like most every other working couple, they just didn’t feel like talking about work after they got home from the office. And I wish like crazy that they were still around for me to ask them about this. 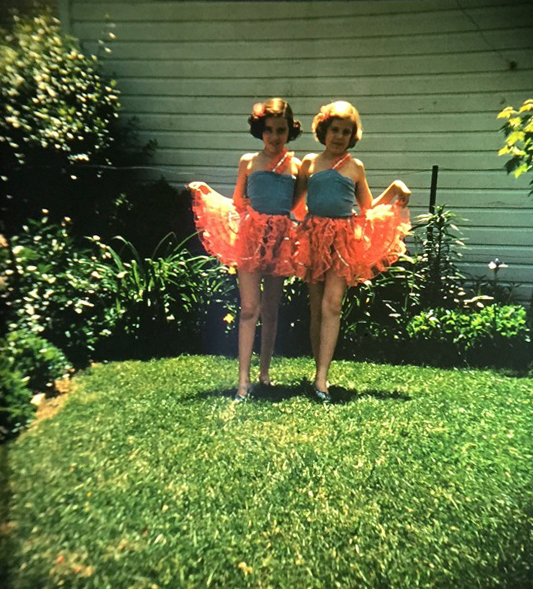 The project, Life After Wartime, is a departure in many ways from my work over the past 10 years which has mainly been focused on animation. But it is also related in other ways, encompassing my interests in found imagery, history and examining our individual and collective relationship to the unknown. The thing I appreciate most about working on this project is how it allowed me to see my family in a different light, as subjects worthy of historical research. It literally brought dimension to my own myopic view of those closest to me and consequently to myself as a member of this lineage. Maybe most importantly, it allowed me to flex my abilities as an artist to shape something out of a set of given materials, something so personal and mundane, into something worth sharing with a room full of strangers. It was a challenge to step outside of my regular working method and make something new, especially in such a short amount of time while also in the final months of my second pregnancy. But in a way, this short sprint to the finish line in a race that was not even in my schedule book allowed me to develop new muscles that I didn’t know I had. In the end I discovered things about myself, as a person and as an artist, and developed some new tools that I can use going forward as I continue to figure out the world and my place in it.

2 comments for “Life After Wartime: Weaving History and Mystery Across Space and Time”