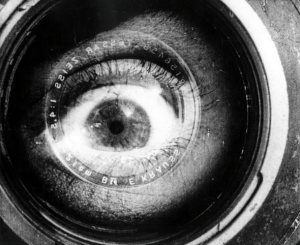 Experimental cinema, we know, has historically existed in a state of constant flux and with respect to the many vicissitudes of contemporary “crisis” facing artists today, this is still very much the case. But, as blinkered, enmeshed, impacted, influenced, invented, inspired, created and destroyed by the machinations of capitalist spectacle as we seem, there is one important difference.

Issue #29: KINO-EYE began with a theme of ‘cinema and surveillance’ and took as its premise the realms of possibility to be found in our aerial, aug-mediated, coded, hybrid, locative, mobile, and nomadic realité of NOW. We then commenced a deeper probe (with our micro-intelligence) of the contra-positioning of sur- and sous-veillant experimental works. It is in this tactical context that OtherZine’s editorial team is very pleased to include, as featured writer, our longtime colleague, filmmaker extraordinaire (8 Bits or Less, Private Life of a Drone), curator/writer/media artist and Yes Men animator Patrick Lichty with his remarks on contemporary dronology, ‘veillance’ and pervasive seeing. Lichty has just moved overseas to teach in the United Arab Emirates and we wish him the very best of luck.

OtherZine is also very pleased to highlight Canadian-based Matt Soar on our front page with his fantastic interactive media artwork, Lost Leaders #14. Try out all the buttons!

And, of course, a big, big “Thank You”  to all of our other great contributors for their ongoing pursuit of critical, meaningful cinema and visual art. Videographer Anna Spence reviews The Cinematic, curator Adrianne Firelli on women makers, Caroline Koebel’s original insights into The Yes Men, superman David Cox on VR filmmaking, unstoppable Gerry Fialka with yet another inspired modernist rant; to Huckleberry Lain for bringing us Tokyo’s public art, to Kevin Obsatz’s escape from MacroCinema, to the one-and-only Mike Mosher for his Ann Arbor Film Festival review, and, finally, last, but surely not least, to filmmaker Stephen Broomer for his unique artist’s project of personal notes!